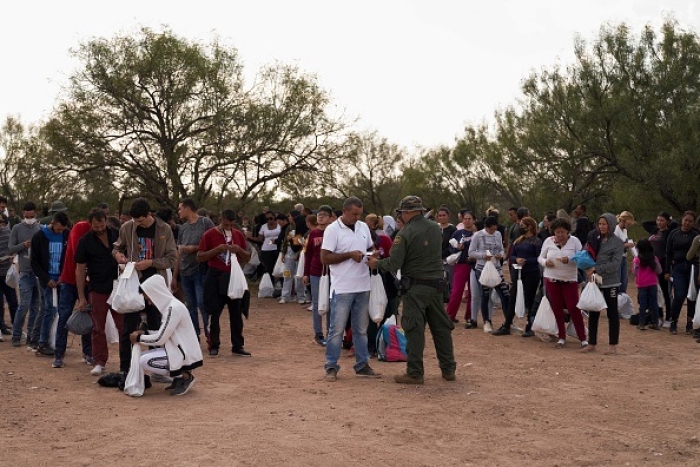 Migrants are processed by US Border Patrol after they illegally crossed the US southern border with Mexico on October 9, 2022 in Eagle Pass, Texas. (Photo by ALLISON DINNER/AFP via Getty Images)

(CNSNews.com) - Rep. Michael Burgess (R-Texas) said the ongoing border crisis will end only "when it's made a priority," and he said border security must come before any immigration reform.

The Biden administration insists that immigration reform legislation will solve the border crisis, but "that won't work," Burgess told "Mornings With Maria" on Thursday:

He was speaking a day after a U.S. Border Patrol agent died in a vehicle crash while chasing a group of illegal border-crossers in Texas:

"But the tragedy of, you know, the president saying that he had more important things to do than go to the border, and this morning, a young wife is waking up without her husband children are waking up without their father.

"This is the type of human tragedy that the president, unfortunately, is deciding to endorse. We have to get security on our southern border."

Burgess said the Texas congressional delegation will hold a news conference later this morning to unveil what they want to do to secure the border.

Host Maria Bartiromo noted that the crisis is about to get worse, when Title 42 goes away later this month and Border Patrol agents can no longer expel illegal aliens on public health grounds.

The lifting of Title 42 is expected to swell the crowd of people crossing the border to 18,000 a day, Bartiromo said. "What is that going to look like?" she asked:

"It's going to look like absolute chaos, and nothing -- nothing, underscore nothing -- is being done to prepare communities in Texas and in other border states for what is going to be happening," Burgess said.

"This is the reason why I think [Texas Gov.] Greg Abbott was spot on to be transitioning people to other locations. It at least got other outlets on the news media talking about our problem in Texas and Arizona and New Mexico. Before that it's just been radio silence other than the media outlets such as yours, and thank you for covering this, because it is so important. But otherwise no one wanted to talk about it -- we'll ignore it and it will go away."

Sens. Kyrsten Simema, an Arizona Democrat, and Thom Tillis, a North Carolina Republican, reportedly are working on a bill that would supposedly improve border security and also give a pathway to citizenship to 2 million DREAMers.

But Burgess said no one has consulted him or other border state representatives about the legislation.

"I would disagree that you can simultaneously fix immigration and border security," he said, pointing to a 1986 law signed by President Ronald Reagan that provided amnesty for millions of illegal immigrants, but did not improve border security.