Release Transcripts of Milley's Calls to China? 'I Can't Do That,' DoD Spokesman Says 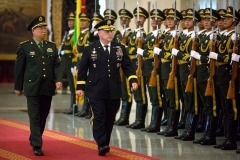 (CNSNews.com) - A spokesman for Joint Chiefs Chairman Gen. Mark Milley issued a statement on Wednesday, saying Milley's calls to Chinese officials in the final months of the Trump presidency were "in keeping" with Milley's "duties and responsibilities" to "maintain strategic stability."

The statement also said, "All calls from the Chairman to his counterparts, including those reported, are staffed, coordinated and communicated with the Department of Defense and the interagency."

So let's see the transcripts of Milleys' calls to China -- calls reported by Washington Post authors Bob Woodward and Robert Costa in their new book, "Peril."

Kirby responded: "I -- I -- I'm certainly not going to sign us up to releasing transcripts of -- of conversations that occurred before we took office, and I -- I just -- I -- I can't do that. I'd refer you to the Chairman's Office if -- if you want more context on that, but we're -- we're not in a position to do that."

During Wednesday's press briefing, Kirby refused to address "hypotheticals," as he called Woodward's account of Milley's phone calls to China:

"I can't speak to the specifics of the conversation -- a conversation that took place, obviously before this administration took office," Kirby said:

But I would add, if I may, again, that it is not only common, it's expected that a chairman of the joint chiefs of staff would continue to have counterpart conversations.

I mean, he is basically the chief of defense for the United States -- we don't call him that, but he has chief of defense counterparts around the world. And having worked for a chairman myself for quite a bit, I can tell you frequent communication with two countries like Russia and China is not atypical at all for a chairman of the joint chiefs.

And those communications are -- they're routine, they're staffed, they're coordinated, and they're transparent -- as transparent as they can be.

A reporter asked if it would also be "routine" for the Joint Chiefs Chairman to inform the counterpart -- China, in this case -- that the U.S. was about to attack: "Would the chairman then call his counterpart to alert them to an incoming strike?" the reporter asked.

Kirby responded, "Without speaking to that hypothetical, what I again would say is that...a part of the value of having these communications, particularly with countries like Russia and China with which we are experiencing tension, is to try to reduce the risks of miscalculation and conflict, to try to take down tensions to make clear what our national security interest are on the issue, and that's a -- the communications channel between our chairman and a chief of defense is a really key vehicle for transmitting and communicating those kinds of messages."

As for Milley's reported insistence that he be directly involved in any presidential order to launch a nuclear strike, Kirby said, ""it is not uncommon at all" for the military to review security protocols, including those involving a nuclear launch. "I see nothing in what I've read that would cause any concern."

The Chairman of the Joint Chiefs regularly communicates with Chiefs of Defense across the world, including with China and Russia.  These conversations remain vital to improving mutual understanding of U.S. national security interests, reducing tensions, providing clarity and avoiding unintended consequences or conflict.

His calls with the Chinese and others in October and January were in keeping with these duties and responsibilities conveying reassurance in order to maintain strategic stability. All calls from the Chairman to his counterparts, including those reported, are staffed, coordinated and communicated with the Department of Defense and the interagency.

Also in keeping with his responsibilities as senior military advisor to the President and Secretary of Defense, General Milley frequently conducts meetings with uniformed leaders across the Services to ensure all leaders are aware of current issues.  The meeting regarding nuclear weapons protocols was to remind uniformed leaders in the Pentagon of the long-established and robust procedures in light of media reporting on the subject.

General Milley continues to act and advise within his authority in the lawful tradition of civilian control of the military and his oath to the Constitution.