Psaki: 'In President Biden's View...We Need to Reduce Our Dependence on Foreign Oil, on Oil in General' 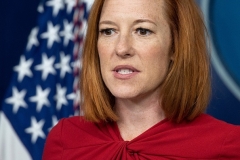 Republicans, including Sen. Tom Cotton (R-Ark.), are urging the Biden administration to sanction Russia's energy industry and to lift all restrictions on U.S. oil and gas productions at the same time, to make up some of the shortfall from Russia.

Cotton last week specifically called for the Biden administration to "start drilling on federal lands again" and "reopen the Keystone pipeline, which would bring more oil into American every day from Canada than we import every day from Russia."

But on Sunday, White House Press Secretary Jen Psaki indicated that President Biden, a green new deal proponent, won't boost U.S. oil production, even as the price goes up and up.

Psaki spoke to to ABC's "This Week" with George Stephanopoulos:

"Well, first, George, I think, on the energy sector, the way that the president -- President Biden has approached sanctions is, we want to take every step to maximize the impact and the consequences on President Putin, while minimizing the impact on the American people and the global community.

"And so energy sanctions are certainly on the table. We have not taken those off. But we also want to do that and make sure we're minimizing the impact on the global marketplace, and do it in a united way.

"I would say that the congressman's recommendations there (she meant Sen. Cotton), the Keystone pipeline was not processing oil through the system. That does not solve any problems. That's a misdiagnosis, or maybe a -- a misdiagnosis of what needs to happen.

"I would also note that, on oil leases, what this actually justifies, in President Biden's view, is the fact that we need to reduce our dependence on foreign oil, on oil in general, and need to -- and we need to look at other ways of having energy in our country and others.

"One of the interesting things, George, we've seen over the last week or so is that a number of European countries are recognizing they need to reduce their own reliance on Russian oil. So I'm not sure we agree with that assessment of what needs to happen. But energy sanctions remain on the table."

Stephanopoulos also asked Psaki what Biden, now sinking in public opinion polls, will say Tuesday night in his State of the Union address:

Psaki mentioned Biden's leadership in a time of crisis, and she said he'll also look to the future and talk about Americans' "resilience," something he often does:

"Well, George, I think there's no question that, in the State of the Union, the American people and anybody watching around the world will hear the president talk about the efforts he has led over the past several months to build a global coalition to fight -- fight against the autocracy and the efforts of President Putin to invade a foreign country. That is certainly something that is present in all of our lives and certainly in the president's life in this moment.

"Leaders lead during crises. That's exactly what President Biden is doing. He'll speak to that, but he's also going to speak about his optimism about what's ahead and what we all have to look forward to."