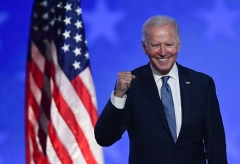 The bill, S.1, is expected to fail, without a single Republican vote.

But according to White House spokeswoman Jen Psaki, the fight to relax state-passed voting rules is not over for President Biden:

"It's important to remember that this has been a 60-year battle to make voting more accessible, more available to Americans across the country," Psaki told the White House press corps on Monday:

And our effort, the president's effort to continue that fight doesn't stop tomorrow at all. This will be a fight of his presidency.

In terms of the steps he's taken, he's had conversations, obviously, with members about supporting this legislation, including Senator Manchin, as you all know, over the last couple of weeks. And he will continue to advocate. He's also asked his vice president--or agreed with his vice president and that she will be in charge of this effort moving forward.

And as it relates to the filibuster, you know, I don't think you have to take it from a-- That would be Congress moving forward to making a decision. If the vote is unsuccessful tomorrow with, it will--I--we suspect it will prompt a new conversation about the path forward, and we'll see where that goes.

A short time later, Psaki repeated that "there is going to be more work done by the president, by the vice president, and by the administration to expand access to voting rights."

"S.1 is the same bad bill it’s been since the House introduced its version in 2019, with the same nakedly partisan motives," McConnell (R-Ky.) said on Monday.

“But ever since Democrats got the election outcome they wanted last fall, we’ve watched our colleagues update the rationale for their partisan power-grab: states must be stopped from exercising control over their own election laws."

McConnell said states are revising their election laws "based on lessons learned during the pandemic-era elections," not to suppress anyone's vote and not for racial motives, as Democrats claim.

Democrats, McConnell said, have "made abundantly clear that the real driving force behind S. 1 is a desire to rig the rules of American elections permanently in Democrats’ favor. That’s why the Senate will give this disastrous proposal no quarter.”

It would take congressional redistricting away from state legislatures, handing it to an unelected commission instead. And it would increase by sixfold the amount of taxpayer money going into the campaigns of incumbent politicians.

The conservative Heritage Foundation offers a full list of reasons why Americans should oppose the Democrats' so-called voting "rights" legislation.