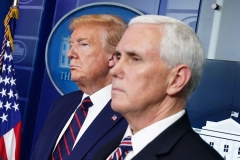 "Absentee balloting and voting is a time-honored tradition in this country. That's where an American will request a ballot, there's signature verification. And we fully support absentee voting,," Pence said.

What you see states around the country doing is authorizing universal mail-in voting, where they're literally mailing ballots to everybody on the list, unsolicited. And then, in many of those same states, they're authorizing what's called vote harvesting that would allow people to go and literally collect ballots. And it just creates a tremendous opportunity for fraud.

It's one of the reasons why we have headed to courthouses around the country to challenge what we think would be a real threat to the basic integrity of the vote. And, remember, that one person/one vote principle is at the very heart of our democracy. And the president and I are going to stand for that. We're going to stand for vote integrity.

Sen. Ted Cruz (R-Texas), a member of the Judiciary Committee, told Fox News's Laura Ingraham earlier this week that it's important to have nine justices on the Supreme Court to avoid a 4-4 tie in case the election outcome must be decided there.

"We know this is a country that is divided, that there's a lot of anger," Cruz said:

Joe Biden has been explicit that if he doesn't win on Election Day, he intends to challenge the legitimacy of this election. He's already hired a top tier team of lawyers headed by veteran Supreme Court advocates. All of us remember what happened in the 2000 election, Bush versus Gore.

I was part of the legal team representing George W. Bush and Bush versus Gore. I think what we saw in Florida, in Bush versus Gore with litigation challenging the election, if Joe Biden loses, we're going to see all over the country, not just one state, but multiple states.

And if the Democrats succeed in keeping this seat vacant, there would be only eight justices on the Supreme Court, eight justices. If they divide four-four, they cannot make a decision. The court has no authority divided four-four.

And so, we all remember the 36 days of uncertainty, of chaos that played out in Bush versus Gore without filling this seat. This election could last weeks or months. And with the kind of chaos we're seeing, that constitutional crisis, I think, would be incredibly unhealthy for our country.

Cruz said no matter how hard the left tries to intimidate Republican senators, "Our job is to honor the promise we made to the voters. I'm telling you right now, Laura, I believe we will have the votes and we will confirm a principled constitutionalist to the court before Election Day."