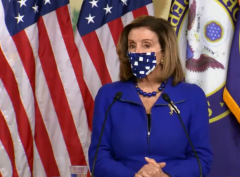 "We're here to support and defend the Constitution of the United States," Pelosi said:

The world witnessed the incitement that the president caused, to incite an insurrection against our government, against our Capitol, against members of Congress, with the use of force and violence.

So for us to -- why bother? Why bother? Ask our Founders why bother. Ask those who wrote the Constitution, ask Abraham Lincoln, ask anyone who cares about our democracy why we are bothering. You cannot go forward until you have justice, and what did we say about the Preamble to the Constitution?

Didn't we say it started out with justice? “We, the people of the United States, in order to form a more perfect union, establish justice.” You've heard me say again and again, Pope Paul the Sixth said, if you want peace, work for justice. Martin Luther King -- peace is not just the absence of dissension, it is the presence of justice. So we will honor the Constitution by establishing justice.

And, again, we can do a couple of things at once. We are moving with our legislation to pass the Biden administration, Biden/Harris administration COVID package. The people, the whole world were witnesses to this, as I said before, so we'll see.

I have no idea how the managers will proceed. I saw their brief when you saw their brief. I'm so proud of the dignity with which they've brought to enable us honor our Constitution.

But I want the public to know that there is no opportunity cost in our defending the Constitution. In fact, it is an enhancement for us to do our work in a way that is respectful of the institutions in which we serve the Constitution -- which we take an oath to -- to protect and defend.

In a follow-up question, a reporter noted that "all signs point to acquittal" in the Senate trial of Trump:

“But I have great confidence in them, and we'll see. We'll see if it's going to be a Senate of courage or cowardice."