Pelosi: 'We Are Concerned About Foreign Powers Coming In and Undermining the Integrity of Our Elections' 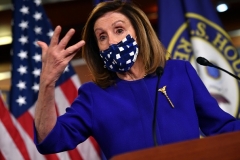 (CNSNews.com) - House Speaker Nancy Pelosi (D-Calif.) on Monday accused President Donald Trump of "trying to disrupt the election," although she didn't say how.

And she also reached into the Russia grab bag: "We are concerned about foreign powers coming in and undermining the integrity of our elections," she said, but again, she didn't say how that is happening.

Pelosi frequently accuses the Russians of trying to interfere in the U.S. election, and she has questioned what leverage Russian President Vladimir Putin has over Trump (see below).

Pelosi on Monday was responding to a question from MSNBC's Ari Melber, who asked her if she views Trump "as the most challenging, as the least legitimate of any president you've had to deal with?"

Well, first, let me just say that this president, of all the presidents I've seen and studied in American history, is the most insecure. He knows he can't win by letting the people speak their voices. So he's trying to disrupt the election.

And who loves our values as a country, a beacon of hope to the world? Not a president who's taking babies out of the arms of their parents without any thought of sending them home. That's not who we are as a country.

So this election has a clear, clear contrast and a person so completely different, so competent in his beliefs in our country, so connected to the concerns, hopes, and dreams of the American people, so authentic about what he stands for, and that is Joe Biden.

So it's going to be a great day for our country. We will contend with the president's skullduggery. He's actually in so many ways just trying to change the subject away from the fact that he has been, again, a total failure in terms of this pandemic, among other things.

But the fact is, is that the people will speak tomorrow, and their voices must be heard. Their vote is their voice, and that is what a democracy is about. It's not about undermining that voice or vote because of your own insecurity as president because you know you can't win unless you disrupt and cause chaos.

Director of National Intelligence John Ratcliffe announced on Oct. 22 that two foreign actors -- Iran and Russia -- were trying to influence public opinion regarding the U.S. election.

"First, we have confirmed that some voter registration information has been obtained by Iran, and separately, by Russia. This data can be used by foreign actors to attempt to communicate false information to registered voters that they hope will cause confusion, sow chaos, and undermine your confidence in American democracy," Ratcliffe said.

Ratcliffe told Americans, "You can be confident your votes are secure." He urged Americans not to let disinformation have its intended effect: "If you receive an intimidating or manipulative email in your inbox, don’t be alarmed, and don’t spread it."

President Trump, meanwhile, is urging Americans to “VOTE, VOTE, VOTE," as he tweeted early on Nov. 3.

Trump has complained about unsolicited ballots being mailed to registered voters; and he's also complained about the recent Supreme Court ruling giving Pennsylvania three extra days to accept ballots that are mailed on Election Day.

At a rally in Fayetteville, N.C. on Monday, Trump called it a "horrible thing" that the court has done:

Number one, cheating can happen like you’ve never seen. This is their dream, and they are known for it. The Philadelphia area is known for it, but what can happen during that long period of time is just a disgrace.

I’m just so tired of some of these horrible political decisions that are being made. It’s a shame. It’s a shame. And I won’t get into it too much, but I’m going to start getting into it because they’re hurting our country very badly.

Trump has predicted that if he wins Pennsylvania, "we're going to win the whole thing."

Pelosi told MSNBC that "democracy is at stake" in today's election, and she said she wants all of the American people to vote -- "however they vote, but I want their vote to be respected, and it should be respected by the president of the United States first and foremost. But we have no reason to think that that will be the case.”

Some Democrats have expressed concern that Trump will not concede the race. Depending on how close the race turns out to be, lawsuits are sure to follow.