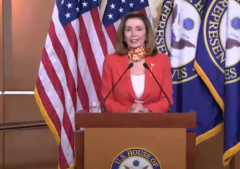 "You are in the United States of America -- it is a democracy.  So why don't you just try for a moment to honor your oath of office."

At her news conference, Pelosi took a number of questions about Trump's comment on Wednesday that "we're going to have to see what happens" with the November election before he commits to accepting the result.

A reporter twice asked Trump if he would "commit" to a "peaceful transferral (sic) of power,"

"It would not be a good thing for the country for our election to be ignored by the president," Pelosi said. She said in her view that "would not constitute a peaceful transfer of power."

Pelosi also accused of Trump of trying to discredit mail-in voting. Trump said the idea of nine states and the District of Columbia sending unsolicited ballots to registered voters -- whose information may be outdated -- is a recipe for fraud.

"What really matters in terms of the peaceful transfer of power is that people vote, and that their vote is counted as cast, whoever they vote for, whatever the outcome," Pelosi said.

"If he honestly gets the majority of the Electoral College and is the next president, that's the peaceful transfer -- continuation of power."

Trump also used the word "continuation," for which he was pilloried by his critics on Thursday.

Also See:
Trump: 'There Won't be a Transfer, Frankly. There Will Be a Continuation;' Schumer: 'There'll Be a Peaceful Transition of Power'
Sen. Angus King: 'Chilling Is Too Mild a Word' for Trump's Refusal to Commit to Peaceful Transfer of Power