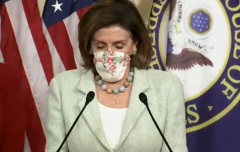 House Speaker Nancy Pelosi bows her head at start of her news conference on May 27. (Photo: Screen capture)

(CNSNews.com) - Face mask on, head bowed, eyes closed, House Speaker Nancy Pelosi spent ten seconds in silence--in what appeared like it may have been a prayer--at the start of her news conference on Wednesday.

Then, removing her mask -- and checking the spacing between her and her Democrat colleagues -- Pelosi noted that just as they appeared before the cameras, the United States reached the grim milestone of 100,000 deaths from coronavirus.

Later in her briefing Pelosi said: “But let's hope and let's pray that a vaccine is imminent, that a therapy or cure is nearby. But they aren't. Testing is. Let's go there.”

When we invited you to this meeting, we were going to be talking about three things -- testing, testing, testing. Testing to open up our economy, testing to send our kids back to school; testing to defeat this villainous virus, the coronavirus.

Little did we know that we would be coming here almost at the exact time when our country would be registering 100,000 people dying from the coronavirus.

One hundred thousand people, in about a hundred days. Think back 100 days. Think -- we just observed Memorial Day -- think back to President's weekend. Would you have ever thought that we would be observing 100,000 people?

"So I'm honored to be here," Pelosi continued, launching into a plug for the Democrat's $3-trillion Heroes Act, which Senate Republicans have rejected as a Democrat wish-list.

"Let us say, we all want the country to open up," Pelosi said.

But science tells us that there is a path, a healthy path to open up in a healthy way. And that path is testing, tracing, treatment and isolation, if necessary.

No, I don't think the president has handled it well. I don't even think he gives a good example by wearing a mask, for heaven's sake. Not to protect him, if he feels invulnerable, but to protect others. That's why we wear masks.

The number of people who should be in church, the number of people who should be at any gathering, those are determinations that are made locally, and I respect that as we unfold this opening. I don't think there's anyone who would say at this point, that tens of thousands of people should come together for a political convention. No matter how great an ego trip it is for somebody. It's dangerous for so many.

But let's hope and let's pray that a vaccine is imminent, that a therapy or cure is nearby. But they aren't. Testing is. Let's go there.