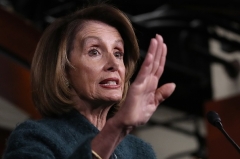 (CNSNews.com) - House Speaker Nancy Pelosi (D-Calif.) on Thursday told CNN she's "satisfied" with how former Vice President Joe Biden has responded to the allegation made by a former staffer, who says Biden sexually assaulted her in 1993.

However, Biden himself has not responded personally, nor has he been asked about the allegation in any of the recent podcasts he has done from the basement of his Delaware home.

Biden's campaign has denied Tara Reade's allegation, but even some media outlets on the left now say it's time for Biden to address it himself.

"Well, I have great sympathy for any women who bring forth an allegation," Pelosi responded:

"You know, it's a matter that he has to deal with," Pelosi said:

But I am impressed with the people who worked for him at the time saying that absolutely, never heard one iota of information about this, nobody ever brought forth a claim or had anybody else tell them about such a claim.

But, again, when we have an important election at hand, one that is, I think, one of the most important ones that we've had. We say that every election, but I think this one is the most crucial. And I supported him because he's a person of great values, integrity, authenticity, imagination, and connection to the American people.

He understands the kitchen table issues of America's working families. His father lost his job when he was a boy. He knows what that feels like for a family, how they're going to pay their bills, their health bills, the education of their children, supporting seniors and their families and the rest. It just -- he's the personification of hope and optimism for our country.

And I was proud to endorse him. America needs a person like Joe Biden with his, again, his integrity and his vision for the future.

The dismissive response to Reade by many Democrats and liberal media outlets is the opposite of the kid-gloves treatment afforded to Brett Kavanaugh's accuser, Christine Blasey Ford, whose claims lacked any corroboration.