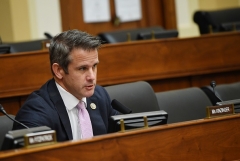 Rep. Adam Kinzinger (R-Ill.) said on Sunday he has “humbly accepted” Pelosi’s invitation to serve on the select committee: “I will work diligently to ensure we get to the truth and hold those responsible for the attack fully accountable.” (Photo by KEVIN DIETSCH/POOL/AFP via Getty Images)

One of the Republicans rejected by Pelosi is Jim Banks of Indiana. He told "Fox News Sunday," "it's clear that Pelosi only wants members on this committee who will stick to her talking points and stick to her narrative. That's why she's picked the group that she's already picked."

In a July 21 statement, Pelosi outlined her narrative, as follows: "We need a comprehensive investigation as to who organized this attack, who paid for it, how they nearly succeeded in overthrowing a presidential election, why they did it, and how we must organize ourselves to prevent anything like it from ever happening again."

Banks said Pelosi is ignoring other important questions that he and Rep. Jim Jordan intended to ask:

"In the history of our country you've never had the Speaker of the House deny the -- the representatives that the minority party submitted for a select committee. It's never happened before. It's a break in precedent. And as everyone in America knows, you have a majority view, a minority view. That's the whole point of our committee structure in the Congress.

"So, why does Nancy Pelosi not want to hear the other side? Why does she not want to answer the tough questions that Jim Jordan and I were prepared to ask and demand answers to? It's pretty clear why, because the further you go up that chain of command, the -- the closer you get to Speaker Pelosi."

Banks said he and Jordan intended to ask very basic questions, "as to why the Capitol was vulnerable to an attack on January 6th? Why was there a systemic breakdown of security at the Capitol on January 6th? If we're going to investigate January 6th, why not ask those questions? And that's...all that this comes down to. She has -- she has already predetermined a narrative about Donald Trump, about Republicans."

Banks said the only people Pelosi allows on the select committee will "be stuck to her narrative, to her point of view."

Banks also noted that the attack on the Capitol already has been investigated by the Senate:

"The Homeland Security and the Rules Committee jointly published a report that came out in June, and it talked about the systemic failure of leadership and...a breakdown of security on January. We -- we know that a number of documents from the speaker's office were submitted for that report, but there are also a number of documents that they refused to release, that the speaker's office refused to release for that investigation that still -- still sit on the computers in the speaker's...office that we should be demanding to take a look at as well.

"And the reason I can only speculate as to why they don't want those documents to be released, because it -- it -- it -- at the end of the day, it -- it shows that -- that the speaker was involved and the lack of leadership and the breakdown of security that occurred in January 6th."

ABC's George Stephanopoulos asked Pelosi, "Are you confident that the committee's work can be seen as credible, if most Republicans won't participate?"

"My confidence is high," Pelosi said: "I do believe that the work of this committee, in order to retain the confidence of the American people, must act in a way that has no partisanship, is all about patriotism. And I'm very proud of the members of the committee. And I'm certain that they will accomplish that goal.

"We have to, again, ignore the antics of those who would -- do not want to find the truth. We will find the truth. That truth will have the confidence of the American people because it will be done patriotically and not in a partisan way."

Pelosi told Stephanopoulos she plans to appoint more Republicans to the committee, now that leader McCarthy has withdrawn the names of the Republicans he nominated.

McCarthy, angry about Pelosi's rejection of Jordan and Banks, issued a statement on Sunday, saying:

Speaker Pelosi’s rejection of the Republican nominees to serve on the committee and self-appointment of members who share her pre-conceived narrative will not yield a serious investigation.

The Speaker has structured this select committee to satisfy her political objectives. She had months to work with Republicans on a reasonable and fair approach to get answers on the events and security failures surrounding January 6.

Instead, she has played politics. Lost in much of the news coverage is the fact that the Senate has already conducted bipartisan investigations that should serve as a roadmap for the House.

Speaker Pelosi’s departure from this serious-minded approach has destroyed the select committee’s credibility. The U.S. Capitol and the men and women who protect it suffered a massive leadership failure. We must make sure that never happens again and that is what Republicans will be focused on.

"The Republicans will say what they will say," Pelosi told ABC on Sunday.

"Our select committee will seek the truth. It's our patriotic duty to do so. And we do not come into our work worried about what the other side, who has been afraid of this -- maybe the Republicans can't handle the truth, but we have a responsibility to seek it, to find it and in a way that retains the confidence of the American people."

Banks said just before he found out he'd been banned from the select committee, he met with the head of the U.S. Capitol Police Union:

They lacked -- they lacked equipment, basic equipment, to take care of something like what should at that point -- should have been expected would occur.

So she doesn't want us to ask these questions, because at the end of the day she is ultimately responsible for the breakdown of security at the Capitol that happened in January 6th.