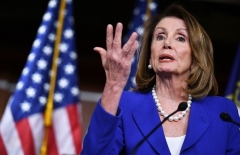 (CNSNews.com) - The U.S. Supreme Court on Nov. 10 will hear arguments in a case challenging the constitutionality of the Affordable Care Act.

A decision isn't expected until next June, but on Sunday, House Speaker Nancy Pelosi (D-Calif.) said she knows how the court will rule with Amy Coney Barrett on the bench:

"What I am concerned about is anyone that President Trump would have appointed was there to undo the Affordable Care Act," Pelosi told CNN's "State of the Union" with Jake Tapper:

That is why he was in such a hurry, so he could have someone in place for the oral arguments which begin November 10the. And it doesn't matter what the process is here. What matters is what it means personally to the American people.

And if you have seniors in your family who are having long-term care paid for by Medicaid, they're going to be pretty soon moving back home and living with you. That may be a wonderful experience, but it isn't -- you should have a choice. And that's not what this is about.

So, I'm not -- it's up to the Senate to make that judgment and to have those -- that (confirmation) process. I don't -- I think it's -- I don't know -- whoever he appointed was going to be there to overturn the Affordable Care Act.

But be hopeful. People have to be hopeful. This is unfortunate that the president would be so disrespectful and rush into this. But, nonetheless, that's what it is. But vote. The antidote to his -- whatever he does is to vote, vote, vote.  Vote for affordable care, vote for your pre-existing condition, vote for your safety, and vote for your health.

The case against Obamacare -- Texas vs. California -- was brought by a group of states and two private citizens in 2017, two months after Congress voted to reduce to zero the "tax" imposed on those who do not maintain health care coverage, as the law requires.

Sixteen States and the District of Columbia intervened to defend the Affordable Care Act.

There are three questions before the Supreme Court:

1. Whether the individual and state plaintiffs in this case have standing to challenge the law's constitutionality;

3. If so, whether the minimum coverage requirement is severable from the rest of the Affordable Care Act.

As a reminder, Congress passed Obamacare in 2010 to increase the number of Americans will "affordable" health insurance.

A key provision of the law was the individual mandate -- a requirement that Americans maintain "minimum essential" health insurance coverage.

Beginning in 2014, those who did not comply with the mandate were required to make a "shared responsibility payment” to the Internal Revenue Service.

In June 2012, Chief Justice John Roberts upheld the individual mandate, upon which the law rests, as "within Congress's power under the Taxing Clause."

But now that Trump and his fellow Republicans have wiped out the individual mandate by setting the "tax" at zero for those who do not maintain health insurance, the law's minimum coverage provision effectively is unenforceable.

Also See:
Trump: 'Obamacare Is Terrible'; 'We're Going to Have a Much Better Plan'