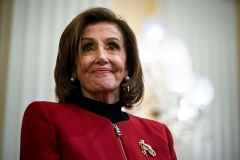 (CNSNews.com) - House Speaker Nancy Pelosi (D-Calif.) had nothing but praise for President Joe Biden's divisive speech in Georgia this week, in which Biden demonized Republicans who refuse to support the partisan Democrat attempt to set federal rules for state-run elections.

Not a single Republican supports the legislation, which Democrats want to ram through by changing the Senate filibuster rule.

Biden on Tuesday suggested that without federal intervention in elections, the United States will slide into autocracy. And he said anyone who disagrees with the Democrat attempt to federalize voting laws stands for "voter suppression" and "subversion"; stands against democracy; and is on the side of racists and segregationists, whom Biden named: George Wallace, Bull Connor, and Jefferson Davis.

"I stand with the President," Pelosi said on Thursday:

I thought his speech was wonderful, and I stand with him in the fight for voting rights. I -- no criticism of Mr. Durbin. He has to do what he has to do vis-a-vis his own members and the rest. The only criticism I would make, too -- I wouldn't say they were criticisms, but observations.

So again, just since you asked my critique of the President's speech, I -- I thought it was fabulous. I come out -- congratulate him for it. It was well-received even among those who have had some apprehension of -- of what's going to happen with this -- all of this next. So I thank him for it. And I stand with the President in the fight for voting rights.

President Joe Biden, at the request of the late Sen. Strom Thurmond, delivered the eulogy at Thurmond's funeral, and indeed he did share some happy memories.