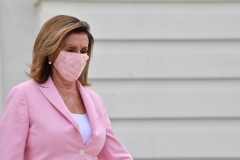 (CNSNews.com) - House Speaker Nancy Pelosi (D-Calif.) frequently says she prays for the health and well-being of President Trump, with whom she has a frosty relationship and to whom she does not speak directly.

On Sunday, Speaker Pelosi indicated that her prayers for Trump have a new focus -- "that the president's heart will be open to the millions of people who have been affected" by COVID, who "don't have the kind of access to care that the president or the rest of us have."

The president has the best of care. That's what we want for him and the family. I always pray for the family, for their safety throughout the presidency, as I have done for all presidents. He is the president of the United States.

We pray for his good health, he speedy recovery. But I hope it will be a signal that we really have to do better in preventing the spread of this virus. People always ask what impact will this have on the election? I say, I'm not interested in that.

What I'm interested in is, what impact will it be on coming to the table with us and doing what we have to -- crush the virus. Listen to science. Have the public-private role that needs to be done to crush the virus.

And so, hopefully and prayerfully, we -- we wouldn't pray if we didn't believe there was a chance that there could be an answer. And so I pray that, in addition to his health, that the president's heart will be open to the millions of people have been affected, hundreds of thousands of families have suffered a death, and also to recognize that a preponderance of this, of the impact of the virus in communities of color that don't have the kind of access to care that the president or the rest of us have.

Pelosi said she thinks the president's illness "can be a unifying moment for our country," although immediately before saying that, she indicated that she doesn't trust what Trump's doctors are telling the public:

"Let's look at this in a larger sense of what it means to the American people," Pelosi said.

"So, I think this can be a unifying moment for our country," Pelosi continued.

"We all pray for the president and his family. We all know that we have to do more to prevent the -- to crush this virus. And one way not to do it is to crush the Affordable Care Act, which the Senate is in the process of trying to do (by) moving quickly on this judicial appointment."

"So, you're no closer than on Friday, when that airline deal fell apart?" host Margaret Brennan asked Pelosi:

"Well, we tried to get that (airline deal) done in the House, but the Republicans objected. But what I said to the airline executives in a public statement is, don't fire people. You know that relief is on the way. So -- and it will be retroactive.

"So, let's keep them employed, because, separate from other industries, when you're fired, when you're let go in the airline industry, it takes months or years to be recertified, reclassified, all of that, security clearances and the rest.

"Not like if somebody has another kind of a job, they leave, they come back. So, that's -- that makes a difference."

(Pelosi, like many members of Congress, depends on the airlines to get back and forth from her home, which is California in Pelosi's case.)

Asked if a stimulus deal could finally happen this week, Pelosi said it "just depends on if they (Republicans) understand what we have to do to crush the virus."

Pelosi is demanding that Republicans agree to fund non-COVID items, including state and local governments whose financial problems predate the pandemic.

Nancy Pelosi on President Trump: ‘I Pray for Him Every Day’
Pelosi, After Provoking Trump, Urges Prayers for His 'Health'
Nancy Pelosi: ‘I Always Pray for the President'
Pelosi: ‘I Do Pray For [Trump] … It Doesn’t Bother Me What He Thinks About That’
Nancy Pelosi Tells Stephen Colbert: ‘I Am Always a Believer in Prayer, as I Know You Are as Well’