Pelosi: 'The Enemy is Within the House of Representatives’ 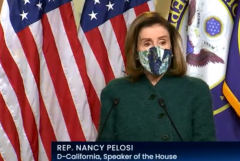 (CNSNews.com) -  House Speaker Nancy Pelosi said she will discuss enhanced protection for members of Congress later today when she meets with the man she's asked to study the security situation.

At her Thursday news conference, she described the enemy as being "within the House of Representatives" as well as outside its walls.

"Today, when I meet with General Honore, he is looking at members here and at home and in between," Pelosi told a news conference.

"So we want to have a scientific approach to how we protect members. I do believe and I have said this all along, that we'll probably need a supplemental for more security for members when the enemy is within the House of Representatives. A threat that members are concerned about, in addition to what is happening outside."

Pelosi said the House Sergeant at Arms will outline other safety initiatives, such as air marshal protection, for House members when they travel to and from Washington.

"But this is very, very important. It shouldn't be -- it shouldn't be that not only is the president of the United States inciting an insurrection, but keeps fanning the flame, endangering the security of members of Congress to the point that they're even concerned about members in the House of Representatives being a danger to them."

A reporter asked Pelosi, "What exactly did you mean that the enemy is within?"

Earlier, Pelosi mentioned freshman Rep. Marjorie Taylor Greene, a Georgia Republican, by name, blasting Republican leaders for assigning her to the Education Committee, given some of Greene's controversial and offensive social media posts.

Greene, a staunch Trump supporter, has been labeled a conspiracy theorist by the partisan media.