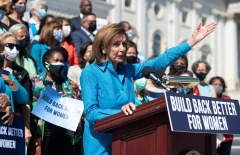 (CNSNews.com) - House Speaker Nancy Pelosi on Tuesday made it clear she knows whose side the corporate media is cheering for.

The California Democrat urged reporters to "do a better job of selling" the Democrats' $3.5 trillion "transformative" entitlement/green new deal bill, which -- she admitted with disappointment -- must be scaled back to pass the Senate.

A reporter told Pelosi, "Our latest CBS News poll shows that only about 10 percent of Americans describe themselves as knowing a lot of specific things that are in the reconciliation package and that the majority don't know anything at all. So, do you think you need to do a better job at messaging? And going forward, how do you sell this if ultimately--"

Pelosi cut her off:

Well, I think you all could do a better job of selling it, to be very frank with you, because every time I come here, I go through the list: family medical leave, climate -- the issues that are in there. And -- but it is true, it is hard to break through when you have such a comprehensive package.

But as we narrow it down and put it out there, I think that it will -- for example, one of the things in the bill is the continuation of the Biden tax credit that is -- child tax credit that is in the -- within the rescue package.

That has great appeal. Do people know where it springs from? No. But it is a vast bill, it has a lot in it and we will have to continue to make sure the public does. But whether they know it or not, they overwhelmingly support it. And by the way, women much more than men. Men like the infrastructure...

Earlier, Pelosi said she was "very disappointed we're not going with the original $3.5 trillion" price tag, which she described as "very transformative."

But in the -- whatever we do, we'll make decisions that will continue to be transformative about women in the workplace. So -- transformed because of child care and universal pre-k, which sort of go together.

The Child Tax Credit, home health care workers, men benefit too, but largely women, and women are those caregivers as well. So not only to free up women to go into the workplace for their own professions and interest, but also to recognize the work that women do in providing that health care  -- issues that relate to family medical leave and the rest.

The Build Back Better is three baskets, it's climate...health, job security and moral responsibility. It's health care, them -- the issues that relate to the Affordable Care Act, Medicare and Medicaid and family care, I mentioned some of those issues already.

And so, whatever we do, it will be transformative, it will produce results, and we would -- are very grateful to our president for saying, "I want to pass the bipartisan legislation on infrastructure, but I will not confine my vision for the future to what can be in that bill." Hence, we need to Build Back Better.

The -- in addition to that, of course -- and that again, let me just say, that's really a very important jobs bill. It's a jobs bill, and it's a bill about our children, and it is about our values. So, I'm pretty excited about the prospect that we have to make some difficult decisions, of course, because we had less -- fewer resources but, nonetheless, no -- diminishing of our commitment to a transformative agenda for the children.

Pelosi said with fewer dollars to spend, choices must be made. "I mean, we're still talking about a couple of trillion dollars, but it's not -- you know, it's much less. So, mostly, we would be cutting back on years and something like that."

In other words, fund the entire Democrat agenda, but for a shorter period of time, in expectation that the public will come to rely on the new government programs and demand continued future funding.