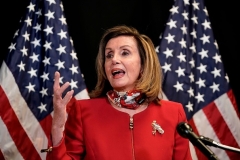 (CNSNews.com) - House Speaker Nancy Pelosi (D-Calif.) began her news conference on Friday by calling the election for "President-elect Joe Biden," even before the vote-counting was finished in key states, not to mention the looming court battles.

She said the extremely close election is a "mandate" for Biden:

"I wish we weren't wearing masks so we could see how exciting it is to come before you today, with Joe Biden having the tremendous mandate that he has,” Pelosi said. “Pretty soon the hyphen will be gone from 'vice-president' to 'President-elect.'

“It's a happy day for our country, because Joe Biden is a unifier," Pelosi continued.

"This morning it is clear that the Biden-Harris ticket will win the White House." (As she spoke, even media outlets had not yet called the election for Biden.)

She noted that Biden received "the most votes ever in the history of our country."

“President-elect Biden has a strong mandate to lead and will have a strong Democratic House with him and many Democrats in the Senate.”

"Sadly, instead of crushing the virus, it appears that the Trump administration will use its final moments in the White House in office in a desperate last attempt to destroy every possible protection for Americans' health and well-being.

"So many people have said to me...what damage do you think Trump will do between losing the election and the inauguration of Joe Biden…and we knew he would be up to mischief, separate and apart from trying to destroy the credibility of our elections, which we criticize other nations for doing…”

Ahead of her Friday news conference, Pelosi informed her fellow Democrats that she wants another term as speaker.

As reported by Politico: "I am writing to request your support to be re-elected as Speaker. I do so with utmost respect for the diverse viewpoints in our Democratic Caucus, the gravity of this role the urgency of the challenges ahead. I also do so with the great joy and appreciation to so many of you who have already offered your support," she wrote in a letter to her caucus."

Pelosi, now 80, has led her caucus for the past 18 years, and if she is re-elected as speaker, she will preside over a shrunken Democrat caucus.

House Democrats lost at least 5 seats in Tuesday's election, while Republicans gained at least 6.  "We did not win every battle in the House, but we did win the war," Pelosi told her news conference.

Democrats are expected to retain their majority in the House. Right now, they have 208 seats; Republicans have 195; and 32 races have not been called.