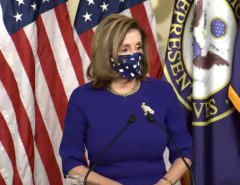 (CNSNews.com) - At her weekly news conference on Friday, House Speaker Nancy Pelosi (D-Calif.) was asked if she's concerned about violence by Trump supporters, "the longer this goes on" -- "this" being the Trump election challenges and the refusal to initiate a transition for Joe Biden.

Pelosi responded that the words of the president of the United States "weigh a ton," and while President Trump did not create the problem of (right-wing) violence, "I think he fans the flames."

"His words weigh a ton. They weigh a ton. And people hear things in a way that could encourage some unfortunate situations, as they have done in the State of Michigan." (She was referring to a plot against Democrat Gov. Gretchen Whitmer.)

You would think that there would be on the part of all Republicans a rejection -- did you see the array of agenda items that Michiganders had? Public executions? You've seen it? Yeah, so you know how dangerous it is. Burning down the Capitol? And not getting, shall we say, told that that's not appropriate in our country.

But instead having -- God knows how -- what's his name, Atlas. Oh my God, did you see his statements encouraging that, coming right there from the right hand of the president of the United States? Saying, you gotta have -- stirred up in the streets and the rest of that.

There is this element in our country -- I don't think Donald Trump created it, but I think he fans the flames. And I think that's a dangerous situation.

Pelosi was referring to White House COVID-19 advisor Scott Atlas, who responded to Michigan Gov. Gretchen Whitmer's latest round of COVID restrictions by tweeting, "The only way this stops is if people rise up." Following criticism, he tweeted that he was not talking about violence or inciting violence.