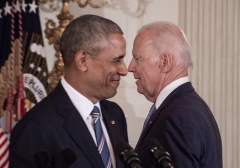 Then-Vice President Joe Biden and President Barack Obama attend a tribute to Biden at the White House on January 12, 2017. (Photo by NICHOLAS KAMM/AFP via Getty Images)

(CNSNews.com) - Former President Barack Obama, now making media appearances to promote his new book, told "The Late Show" with Stephen Colbert he never wished for a third term, but if he could have had a "stand-in" or a "front-man," he wouldn't have minded telling that person what to say:

I've said this before, people would ask me, knowing what you know now, do you wish you had a third term?

And I used to say, if I could make an arrangement where I had a stand-in, a front-man or front-woman and they had an ear piece in and I was just in my basement in my sweats looking through the stuff and I could sort of deliver the lines, but somebody else was doing all the talking and ceremony, I'd be fine with that, because I found the work fascinating.

I mean, I write about the -- even on my worst days, I found puzzling out, you know, these big, complicated, difficult issues, especially if you were working with some great people, to be professionally really satisfying. But I do not miss having to wear a tie every day.

Many of the people signing on with Joe Biden's incoming administration formerly worked for Barack Obama.

In the interview with Colbert that aired Monday night, Obama said he's "so optimistic" about young people who are "smarter than we were, they're more sophisticated, they're kinder, they're environmentally more conscious, they believe in stuff...that maybe we gave lip service to but didn't want to live out because it required some sacrifice.

"And you see them living out their commitments in really powerful ways. But we have to be willing to give them the chance to remake institutions and change old habits. So they make me optimistic, and I just want to make sure that we don't screw things up so bad that, by the time they're in charge, that, you know, it becomes that much harder."