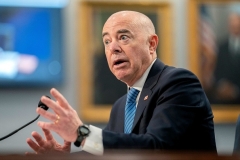 Department of Homeland Security Secretary Alejandro Mayorkas has put his Disinformation Governance Board on "pause" while seeking a way forward from the department's advisory board. (Photo by STEFANI REYNOLDS/AFP via Getty Images)

(CNSNews.com) - Nina Jankowicz went on MSNBC Wednesday night to explain her resignation from the Homeland Security Department and her disappointment in what she called the "incorrect" characterization of the DHS Disinformation Governance Board she was tapped to lead.

She indicated that the sheer size of the Homeland Security bureaucracy makes another "disinformation" layer necessary:

"All these sensationalist narratives about what people thought the board was going to do were completely wrong," Jankowicz told Chris Hayes. "It was a coordinating mechanism. It was meant to, you know, make sure that the very large agency that is the DHS, that people were talking to each other within it."

DHS, created after the 9/11 attacks, says it has more than 240,000 employees in jobs that range from aviation and border security to emergency response, from cybersecurity analyst to chemical facility inspector. It is the third largest Cabinet agency behind the Defense Department and Veterans Affairs.

Jankowicz gave examples of how the Disinformation Governance Board would have worked:

"FEMA, the agency that handles disasters and environmental issues, would often counter misinformation about natural disasters. And let's say a former adversary like Iran or China, perhaps, would put out a narrative that says, oh, you know, here's how you get out of this city, or here's where you can find disaster aid. And that could put people really into danger, their lives into danger.

"That's the sort of disinformation and misinformation that we were looking to support the department in addressing, to make sure that they had best practices, and most importantly to protect Americans' freedom of speech, civil rights, civil liberties, and privacy while we are doing all of that work.

"So, every characterization of the board that you heard up until now has been incorrect, and frankly, it's kind of ironic that the board itself was taken over by disinformation when it was meant to fight it."

Jankowicz defined disinformation as "false or misleading information spread with malign intent," by China or Russia for example; while "misinformation" is "when Aunt Sally or Uncle John are spreading those rumors and conspiracy theories at the dinner table."

Jankowicz said she understands that Americans don't want government involved in policing speech, and she insisted that wasn't what she or the board intended to do.

"I spent a lot my career, you know, testifying both before Republicans and Democrats on both sides of the aisle, advising foreign governments about how to build resilience in populations. People need the tools to navigate today's information environment, it's incredibly overwhelming.

"And so I had hoped that we would do some creative programs to equip people with the tools to find that information in today's information environment -- not say what was true or false, that was never the intention."

(But steering people to certain information sources apparently was.)