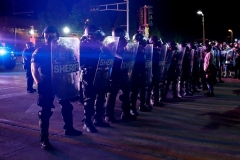 Protesters face off with law enforcement officers outside the County Courthouse in Kenosha, Wisconsin on August 25, 2020. (Photo by KAMIL KRZACZYNSKI/AFP via Getty Images)

(CNSNews.com) - Rep. Cedric Richmond (D-La.), asked about the ongoing violence in some Democrat-run cities, said he is not concerned about Biden's apparent reluctance to address the issue.

Biden did not mention the mob violence in Portland and other cities in his acceptance speech at the Democrat National Convention, an omission criticized by Vice President Mike Pence in his own speech to the Republican convention.

Since then, Biden has issued two statements condemning the violence.

“I don't have a concern where we are on this issue,” Richmond, a national co-chair of the Biden campaign, told NBC’s “Meet the Press.”

I mean, we have been very clear that police reform in this country is a necessity and that unarmed black people being killed by the police should be low-hanging fruit. And if we could just get President Trump to acknowledge that and to push for real police reform.

Then let's address the issue why NBA players did not play in basketball games. The fact that people are waking up and speaking out on Jacob Blake's death. I mean, that's the issue.

And I think that without a plan from the White House to address it, it's just really sweeping it under the rug...Vice President Biden has been very clear. He put out a plan on police reform. And I think that that should be the subject we're talking about.

Host Chuck Todd asked Richmond what appeared to be a "bash-Trump" question: "When it comes to the violence in the streets now, who should be held responsible?"

"Those perpetrating the violence," Richmond responded.

It's not about law enforcement or protesters. It's about making sure that police are held accountable when they violate people's constitutional rights when they shoot unarmed black people. And if the president can convene that conversation, then I think that we would be in a better space.

So how do you break this country and then run for re-election, saying I want to fix everything that I just destroyed? And so that will be the message of the campaign and we're going to have to make that case.

But at the same time, I think America is in a real fragile point. And I think that you will hear Joe Biden speak, you will hear him try to heal this country, because the president just doesn't have it in him.

Richmond said the Biden campaign will counter President Trump's efforts to appeal to black male voters by not taking them for granted:

"We're going to talk directly to them. So whether it's about mass incarceration, economic opportunity, home ownership, college affordability, increasing education funding, all of those things.

Also See:
Pence: 'The Hard Truth Is, You Will Not Be Safe in Joe Biden’s America'