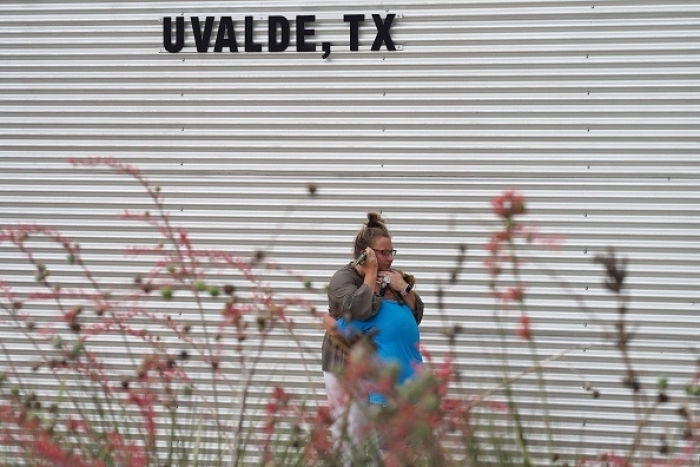 A woman hugs a young girl following the horrific mass shooting in Uvalde, Texas, on May 24, 2022. (Photo by ALLISON DINNER/AFP via Getty Images)

(CNSNews.com) - On Wednesday, in a bitter screed against Republican politicians, MSNBC anchor Joe Scarborough urged Americans to "retake" the country -- "peacefully," he said.

He called out Sen. Joe Manchin (D-W.Va.) by name, telling him, "It's time you did something."

Manchin opposes Democrat efforts to scrap the 60-vote threshold needed to pass most legislation in the Senate, including gun control legislation. "Joe, why don't you get out in front of something for once in five years and start talking about what you can do instead of (what) you can't do? Because all you ever talk about is what will you can't do," Scarborough said.

But Scarborough saved his strongest words for Republican politicians, calling them “fools,” “cowards” and “barbarians,” and blaming them for "turning our classrooms, our churches, our country music festivals into killing zones."

"It is insanity. And this is what state Republicans -- let me be very clear -- okay -- Republican state legislators. This is what they're doing. And they're doing it despite the fact the overwhelming number of Americans oppose it...

These people think that little kids getting gunned down in school, that's just the cost of freedom. These are, by the way, the same people that wouldn't wear a piece of paper over their mouth during a pandemic that killed a million Americans.

"They're really -- there is – there is no other -- no other word that describes them but radical, maybe dangerous, immoral. It all fits. By the way, yeah, I'm doing this the day after, because, you know what, go back and listen to what I said the day after January 6. The day after September 11th. No. This is the time to talk.

"You know what, now is the time to talk. And it's time for us to take our country back peacefully. But it is time to retake America. Take it back peacefully from these state legislators who are turning our classrooms, our churches, our country music festivals into killing zones."

The 18-year-old gunman who killed 19 children and two teachers at an Uvalde, Texas elementary school came from a broken home. He reportedly shot and seriously wounded his grandmother, with whom he was living, before acting out the veiled threats he made on social media.

A Border Patrol agent who was in the area on Tuesday shot and killed the teenager, who barricaded himself inside an occupied fourth-grade classroom.