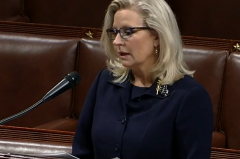 (CNSNews.com) - As Congressional Democrats seek to consolidate their power by attempting to federalize elections, make D.C. a state, pack the Supreme Court and end the filibuster -- moves that would squelch Republicans for years to come -- it was surprising to hear a defense of the two-party system coming from liberal pundits on MSNBC this Wednesday morning.

The conversation revolved around the anticipated ouster of House Republican Conference Chair Liz Cheney, whom Democrats and media activists are hailing as a hero, a woman of true integrity, for her outspoken anti-Trump stance.

"I think, frankly, as currently constituted and run, the Republican Caucus that will today remove Liz Cheney from this leadership position is not a functional, rational actor in the constitutional system," Historian Jon Meacham told MSNBC's "Morning Joe" on Wednesday morning.

"And that is very scary for anybody who loves this country. Because the way we're built, both explicitly and implicitly, is we need two parties that are about the mediation of differences and not an unfolding, apocalyptic war. And right now we have one party that's not and we have one party that is."

Picking up where Meacham left off, former U.S. Sen. Claire McCaskill, an MSNBC contributor, warned that if Republicans keep going down the Trump path, "they can't win!"

"You know, I think it's so important that Jon Meacham is with us this morning," McCaskill said. "Because I do think this day is going to be an important day in history..."

I do believe that this is the darkest hour for the Republican Party. And the thing that's so weird, I mean, this is what bad guys in other countries do. This is what we have stood against as a nation, since our birth. Despots in other countries, lying and trying to manipulate power to their own will.

I never dreamt there would be so many welcome co-conspirators in this effort to undermine the most precious thing we have of all, which is our democracy, based on free and fair elections. It is awfully bad. Just to make it very brutal in terms of -- political terms, what I can't get is they (Republicans) aren't doing the math. You look in raw political terms. Do the math.

McCaskill pointed to a Morning Consult poll showing that 50 percent of Republicans believe Liz Cheney should be voted out of her leadership position. "But 50 percent didn't say she should go," McCaskill continued.

"So, it is really going down a path that really harms -- listen, do I want the Democrats to win? Of course I do. I think you're seeing nails in the coffin of a Republican Party that has lost all moral high ground on integrity. They are kicking somebody out for telling the truth."

In a speech on the House floor Tuesday, Rep. Cheney said, "I will not sit back and watch in silence while others lead our party down a path that abandons the rule of law and joins the former president's crusade to undermine our democracy."

Cheney called Trump a liar: "We must speak the truth. Our election was not stolen, and America has not failed."

I really got a sense last night when watching Liz Cheney that we were watching, in one way or another, a piece of history. It's not being melodramatic. As a conservative, you look back to those moments where somebody steps into the limelight and leads a movement. I think about Reagan in 1966. I think about Margaret Thatcher in 1975 in Britain, and her address before the Conservative Party. She sort of sweeps away the lectern, and shows everybody who's in control there.

It's a party that, well, forget about ideology. It's a party that's anti-democratic and that refuses -- and is taking its position, its future position is being a party that will refuse to accept Democrats winning elections -- if they don't like the outcome, they won't accept the election results. It's certainly, certainly what it seems if you look at Arizona, and you look at what's happening in House of Representatives right now with the Republican caucus.