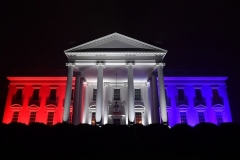 he White House is illuminated with red, white and blue lights during the 2020 "Salute to America" event in honor of Independence Day. (Photo by NICHOLAS KAMM/AFP via Getty Images)

(CNSNews.com) - The Trump White House is "well aware" of the financial difficulties some American workers are experiencing as a result of COVID-related business shutdowns, White House Chief of Staff Mark Meadows told "Fox & Friends" on Monday.

"A lot of very difficult circumstances out there, we're well aware. Those are getting communicated to the president each and every day, and he stands ready to act," Meadows said.

President Trump "was working over the weekend to extend that PPP (Paycheck Protection) Program," Meadows said:

The interesting thing is, this president will do more in the next four weeks than Joe Biden and his team did in the last 40 years. And so you just need to stay tuned, because starting this week, you'll see executive orders, you'll see business that actually goes forward from the Oval Office.

When Congress doesn't act, this president's going to make sure that he steps--"

(He was interrupted before he could finish his thought, which sounded a lot like Obama’s 2014 “I’ve got a pen and I’ve got a phone” promise to use executive orders when Congress failed to produce legislation.)

Asked for some hints about what the president plans to do on his own in coming days, Meadows offered a "sneak preview."

We're going to be looking at how we make sure that China is addressed. How we bring manufacturing back from overseas to make sure the American worker is supported.

Meadows also said, despite the rising number of coronavirus cases, "We're not going to shut the economy down again. I think the theme is this -- is that we have to adjust our personal lifestyle in a temporary basis because help is on the way.

"He's willing to invest to make sure that whatever adjustment we have to make in our lifestyle is temporary, and we've got to get the schools open this fall. We're coming up with plans to do just that."

President Trump plans to hold another rally this coming Saturday in Portsmouth, N.H. The outdoor event will take place at the local airport.