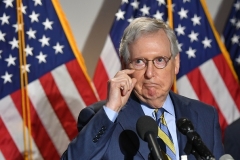 (CNSNews.com) - The Democrats' $1.9 trillion stimulus bill, about to be signed into law by President Joe Biden, "is a classic example of big government Democratic overreach in the name of COVID relief," Senate Minority Leader Mitch McConnell (R-Ky.) told a news conference on Wednesday.

McConnell said the bill is "wildly more expensive" than the current situation warrants:

Look back a year -- the CARES Act was roughly $2 trillion. That was the heart of the pandemic. We had just shut down the economy. We were sending people home. And here we are a year later the Democrats acting as if nothing has changed. And all the signs are that we're on the way out of this, and this is vastly more expensive than should have been approved at this juncture.

This debt, as Senator Scott just pointed out, is continuing to pile up and pile up and pile up. Larry Summers, Bill Clinton's secretary of the Treasury, said way too much. That's the point -- we're doing damage to the future of this country by spending dramatically more money than we obviously need at this particular point -- at which time the economy is coming back, people are getting vaccine.

We're on our way out of this. We're about to have a boom. And if we do have a boom it will have absolutely nothing to do with this $1.9 trillion.

McConnell noted that the bill solves the financial problems of New York and San Francisco, both Democrat strongholds.

"And we all know that what we should have been doing and would have been doing had this been a bipartisan discussion, instead of a jam-the-other-side approach, is $500- or $600 billion directly targeted at the problem. But, of course, the $1.9 trillion...package, as we said repeatedly, only had about one percent or less for vaccines, nine percent or less for healthcare.

"So, I think this is actually one of the worst pieces of legislation I've seen pass here in the time I've been in the Senate. We believe the American people need to learn more and more about it. It's--and we're going to see that they do that in the coming months, as we talk repeatedly about the provisions in the bill that the Democrats do not want to discuss."

"I look forward to signing it later this week," said Biden, who is giving a prime-time address tonight to "talk about what we have been through as a nation this past year. More importantly, I'm going to talk about what comes next. I am going to launch the next phase of the COVID response and explain what we will do as a government and what we will ask of the American people.

"There is light at the end of this dark tunnel over the past year," Biden said. "We cannot let our guard down now or assume the victory is inevitable. Together, we are going to get through this pandemic and usher in a healthier and more hopeful future."