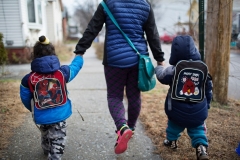 McConnell's objections to the Democrats' "Build Back Better" reconciliation package are well-known, and on Tuesday he delved into one issue in particular -- the plan to subsidize child care for some families at the expense of others.

"The story is like the Democrats' long march toward socialized medicine," McConnell said: "Take an intimate area of American life, pile on a maze of new mandates, regulations, cost increases, and subsidies, and push families out of the driver's seat so Washington can run their lives."

Don't believe them when they say if you like your child care, you can keep it, McConnell said:

"Democrats want to sweep the first five years of children's lives into a new set of top-down, one-size-fits-all, Washington-knows-best regulations." The "big-government scheme" would make child care more expensive, and use taxpayer money to subsidize only those families who make child care arrangements that Democrats are pushing.

According to the framework agreement outlined last week by President Joe Biden, the "Build Back Better" agenda would make "the most transformative investment in children and caregiving in generations. The framework will save most American families more than half of their spending on child care, deliver two years of free preschool for every 3- and 4-year-old in America, give more than 35 million families a major tax cut by extending the expanded Child Tax Credit, and expand access to high-quality home care for older Americans and people with disabilities."

But as McConnell noted, some families with young children would be left to fend for themselves in a newly inflated child care market:

Their bill would give Democrats and bureaucrats massive new authority they could use to shape curricula and standards nationwide. If providers don't play along, they could be left out in the cold.

The Biden administration wants to insert itself into the most intimate family decisions and tell parents how to care for their toddlers. The entire scheme violates the basic principle of family fairness.

Speaker Pelosi suggested last week that she approves of one kind of family structure -- quote, "parents earning and children learning." She said Democrats want government programs to liberate families so that both parents work fulltime. Well, lots of families like that model. But other families prefer other models. Not everybody defines liberation the same way.

McConnell said Democrats want to "bless" certain family arrangements, but not others such as a parent or grandparent caring for a child at home. "Sorry, Democrats want to redistribute money away from your family to other households that may earn even more money," he said.

"Democrats could easily end up taxing working-class families with a full time parent in order to subsidize the arrangements of wealthier, two-income households. They're steamrolling over family fairness, over families' choices and options, over the diversity of American families and their aspirations.

"Oh, and by the way, Democrats appear to want to change the law in ways that could force faith-based providers to put aside sincerely held religious beliefs."

McConnell noted that Health and Human Services Secretary Xavier Becerra would be among those administering the child care program. He's "the California lawyer who got famous by suing Catholic nuns for being too Catholic and crisis pregnancy centers for being pro-life.  A hardcore culture warrior. And this person's going to be the new national czar for early childhood?" McConnell asked.

Another key administrator would be Education Secretary Miguel Cardona, a man who tried to divert funding for civics education towards woke propaganda, McConnell noted. And then there's Attorney General Merrick Garland who "just wrote an entire memo singling out concerned parents who speak up at their local school board meetings.

"Now they want to extend their federal control over babies and toddlers as well," he warned.

McConnell said "all this government meddling" is estimated to cost $400 billion over just the first several years. "After that, nobody really knows what the blank check will add up to. Taxpayers are supposed to pony up a blank check for the purpose of having less control over family choices. I think the American people will take a pass," he concluded.