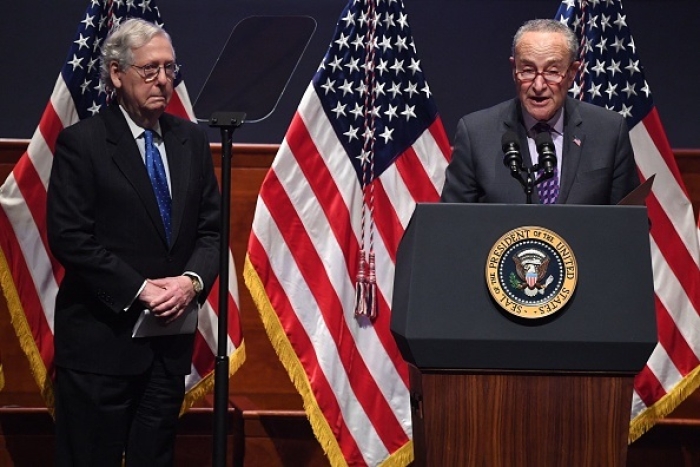 (CNSNews.com) - The Senate's two leaders both responded to Elon Musk's purchase of Twitter at their respective news conferences on Tuesday.

Senate Majority Leader Chuck Schumer (D-N.Y.) said, "Twitter has been a dark, dark place. I hope it doesn't get any darker."

"It'll be interesting to see what it -- what impact it has on the way Twitter operates. But we're all watching it with a great deal of interest because there's certainly been our share of complaints about the way it's been run in the past," McConnell added.

Schumer also commented on a bill introduced by Sens. Amy Klobuchar (D-Minn.) and Chuck Grassley (R-Iowa) in October 2021 "to restore competition online by establishing commonsense rules of the road for dominant digital platforms to prevent them from abusing their market power to harm competition, online businesses, and consumers."

"We had a very good discussion," Schumer told Tuesday's news conference. "She made a very powerful presentation, and I’m working with her to see that we can get 60 votes to get to the floor."

When she introduced the bill, Klobuchar said "dominant digital platforms" increasingly "give preference to their own products and services," so "we must put policies in place to ensure small businesses and entrepreneurs still have the opportunity to succeed in the digital marketplace."

Grassley said U.S. laws have not kept up with the evolution of Big Tech to ensure those companies "are competing fairly."

"These companies have continued to become a larger part of our everyday lives and the global economy, controlling what we see and how we engage on the internet. Big Tech needs to be held accountable if they behave in a discriminatory manner.

"Our bill will help create a more even playing field and ensure that small businesses are able to compete with these platforms," Grassley concluded.

According to its sponsors, "The American Innovation and Choice Online Act" will set clear, effective rules to protect competition and users doing business on dominant online platforms, including:

-- Prohibiting dominant platforms from abusing their gatekeeper power by favoring their own products or services, disadvantaging rivals, or discriminating among businesses that use their platforms in a manner that would materially harm competition on the platform; and

-- Prohibiting specific forms of conduct that are harmful to small businesses, entrepreneurs, and consumers, but that do not have any pro-competitive benefit, including:

-- Requiring a business to buy a dominant platform’s goods or services for preferred placement on its platform;

-- Misusing a business’s data to compete against them; and

-- Biasing search results in favor of the dominant firm.

-- Prevent self-preferencing and discriminatory conduct by the most economically significant online platforms with large U.S. user bases which function as “critical trading partners” for online businesses.