McConnell: People Outraged Over Kavanaugh Allegations 'Seem to Have Little or No Interest' in Biden's Accuser 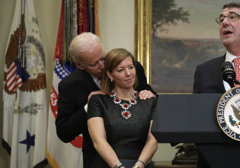 Ashton Carter makes remarks after he was sworn in as secretary of Defense as his wife Stephanie and Vice President Joe Biden listen, Feb. 17. 2015. (Alex Wong/Getty Images)

(CNSNews.com) - Senate Majority Leader Mitch McConnell (R-Ky.) was asked on Monday about allegations that in 1993, then-Sen. Joe Biden sexually assaulted a young staffer named Tara Reade, something Biden has not been asked about in his many recent (liberal media) interviews. His campaign denies it.

"What is a fair way of contemplating the allegation in a way that respects due process and the presumption of innocence?" Fox Radio host Guy Benson asked McConnell:

Well, at the very least it's pretty obvious that the same people who were outraged about allegations -- unproven allegations against Justice Kavanaugh when he was in high school seem to have little or no interest, or certainly not as much interest in suggestions of improper behavior by an adult who's in the Senate.

"Biden has not been asked about this directly," Benson noted. "He has not said a word about it. Is that a strategy that you think could have worked for Brett Kavanaugh?"

"No, I don't think that would have worked for Justice Kavanaugh," McConnell said.

"And look...I can't imagine that this kind of an issue isn't going to be discussed during the presidential campaign. Surely those in the reporting world who were so animated about the investigation of Justice Kavanaugh would have an equal interest in -- in this subject."

That is not the case so far, however.

On Friday, NewsBusters uncovered video that appears to show Reade’s mother calling in to CNN’s "Larry King Live" in 1993 and referencing her daughter’s accusations against Biden at the time. (Newsbusters and CNSNews are both part of the Media Research Center.)

Reade made her allegations against Biden in March. Since then, four people have come forward, saying Reade told them about the alleged assault around the time she says it happened.

Business Insider reported on Monday that two of those four "sources" include a former neighbor of Reade's, who told Business Insider, "This happened, and I know it did because I remember talking about it" with Reade in the mid-1990s.

According to Business Insider: "The other source, Lorraine Sanchez, who worked with Reade in the office of a California state senator in the mid-'90s, told Insider that she recalls Reade complaining at the time that her former boss in Washington, DC, had sexually harassed her, and that she had been fired after raising concerns."