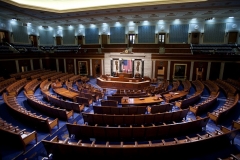 (CNSNews.com) - Senate Majority Leader Mitch McConnell (R-Ky.) noted on Thursday that while the Senate has been in session, confirming nominees, holding hearings, and legislating; and while essential workers across the country remain on their jobs -- "the Democratic House of Representatives has essentially put itself on paid leave for months."

"Since the early days of this crisis, the self-described People's House has been suspiciously empty of people," McConnell said in a floor speech. He noted that the House has convened for a legislative session for just two days in the last eight weeks.

"As this point, I'm wondering if we should send senators over there to collect their newspaper and water the plants."

On a more serious note, McConnell brought up what he called "a new wrinkle" -- "a precedent-breaking, remote-voting scheme that will let one member cast ten additional votes."

One lawmaker will be allowed to cast eleven votes, one for him or herself, plus ten proxies.

"Remember, these are the people who want to remake every state's election laws," McConnell said.

One of them happens to be Article 1, Section 5 of the U.S. Constitution, which says a majority of each house shall constitute a quorum to do business.

Now for about 231 years, Congress has managed to fulfill the job requirement. They've worked through a civil war, two world wars, terrorist threats, and a major pandemic without trying to shirk this duty.

The 12th Congress endured the War of 1812, including the occupation of Washington and the burning of this very building that we're in right now, without abandoning in-person meetings.

The Constitution requires a physical quorum to do business. Normally, both chambers may presume one. But any House member has a right to demand an in-person attendance check. The Democrats' new rule says one person may mark himself and ten others present, even if they are nowhere in sight. A flat-out lie.

McConnell said there will be "enormous constitutional questions" surrounding anything the House does under the remote voting scheme.

"Two normal work days in eight weeks?" McConnell repeated. "And now they're playing games with the Constitution so they can continue their never-ending spring break well into July."

House Speaker Nancy Pelosi (D-Calif.) on Wednesday told her colleagues that in light of the public health emergency, she would invoke House Resolution 965 for 45 days.

That resolution, passed last week, authorizes and sets forth procedures for remote voting by proxy in the House of Representatives and provides for official remote committee proceedings during a public health emergency for a 45-day period. Based on the status of the public health emergency, the 45-day period may be extended for an additional 45 days or terminated earlier.