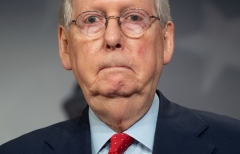 (CNSNews.com) - There's a reason the Senate requires a two-thirds vote for anything significant to become law: It's so the majority party can't "simply roll over those who disagree with them," Sen. Mitch McConnell said Monday.

In a speech on the Senate floor, McConnell argued against a Democrat plan to change Senate rules in a way that would limit Republican filibusters.

Requiring 67 votes to cut off debate and proceed to a vote on a bill "protects minority views from majority rule," he said. Changing the rule to require a majority vote instead of a 60-vote threshhold would suppress the views of millions of Americans, he said.

If the player does not load, please check that you are running the latest version of Adobe Flash Player.

"Let's be clear: the rules change that's being proposed is not an affront to me or to the Republican Party," McConnell said. "It's an affront to the American people. It's an affront to the people who sent me and the other 46 Republicans here to represent them in the Senate, but whose voices would be shut out if the majority leader and this cohort of short-sighted Senate sophomores have their way and permanently change this body."

McConnell noted that right now, Senate Republicans represent the voters of 31 states with a total population of more than 180 million Americans:

"Shutting off our right to express the views of our constituents, as is being proposed, would effectively shut these people out of the process," he said.

"If a bare majority can now proceed to any bill it chooses, and once on that bill, the majority leader, all by himself, can shut out all amendments that aren't to his liking, then those who elected us to advocate for their views will have lost their voice in the legislative process.

McConnell noted that the Congressional Record "contains mountains of reverential statements by Republicans and Democrats" extolling the Senate as the one legislative body that protects minority views from majority rule, by requiring 67 votes for anything significant to become law.

"Why?" McConnell asked. "So that majorities can't simply roll over those who disagree with them," he said. "And, just as importantly, so majority parties are forced to resolve the great issues of the moment in the middle, ensuring their stability and permanence.

"It's this mechanism that has so frustrated majority parties over the years, but which has ensured -- at least most of the time -- that our laws are stable and not subject to change every time the parties change power. This is what makes the Senate different. This is what makes this body great. And, up until recently, many of those who now want to change these rules agreed."

McConnell said doing away with the 67-vote threshold needed to cut off debate on a bill "would have such a corrosive effect on comity that it would threaten our ability to ever get anything accomplished around here."