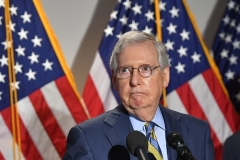 (CNSNews.com) - Senate Republicans want the American people to know what is likely to happen if Democrats re-take the Senate in the November election.

"Eliminating the filibuster; D.C. statehood; Puerto Rican statehood; and packing the courts. That's what you get if you change the Senate," Senate Majority Leader Mitch McConnell (R-Ky.) told a news conference on Tuesday.

The American people have a choice to make--who do they want to run the Senate? Do they want to enable the Democrats to run roughshod over the country by changing the basic structure here?

Senate Minority Leader Chuck Schumer (D-N.Y.) told a news conference on Tuesday that Democrats will do whatever it takes to achieve "strong and bold change." He left open the possibility of eliminating the filibuster.

Sen. John Thune (R-S.D.) noted that Democrats last week filibustered a motion to proceed to a Republican COVID relief bill that didn't give them everything they wanted.

"And it's not the first time that the Democrats have filibustered a motion to proceed," Thune noted:

They did that on Senator Scott's policing reform bill, and they did that on the original CARES package, which makes it incredibly ironic that at the very time they are using the filibuster to block legislation from even being considered on the floor of the United States Senate, they are simultaneously talking now about waging a war against the filibuster. In other words, getting rid of the filibuster if they were to get the majority...

But the idea that the Democrats would be using the filibuster to block legislation from even getting to the floor where it could be open to an amendment process, at the same time that they are talking about--publicly, I might add, publicly-- about getting rid of the legislative filibuster, probably stretches the word irony even in Washington terms.

But what it means essentially is the rules of the Senate are designed to protect the rights of the minority. And no majority should be able to run roughshod over or steamroll the minority. And that's why the United States Senate was created by the Founders in the way that it was.

So here we are defending the Democrats' rights while they're in the minority, while they're already talking about if they--if they were able to gain the majority, getting rid of that very protection that they were being afforded today, and using on a regular basis to block legislation that we put on the floor from being considered.

So I hope that this debate, discussion that we are having about this subject, as voters think this fall about what could happen if the Democrats get the majority and have the presidency and the House in a new government in January, all the things that they could do if you strip away the protections that the minority has in the United States Senate. And I hope the American people think long and hard about that when they vote this fall.