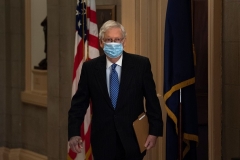 (CNSNews.com) - It's not up to the federal government to determine how the states conduct their elections, Senate Majority Leader Mitch McConnell told a post-election news conference on Wednesday.

The Trump campaign is now suing three states, Michigan, Pennsylvania, and Georgia, over the counting and handling of late-arriving ballots, and it has requested a recount in Wisconsin.

McConnell noted that Democrats also have "lawyered up" as the vote-counting continues.

The courts will decide disputes. That's the way we do it in this country. Having close disputed elections is not unusual. It happens all of the time, so I don't think the president should be criticized for suggesting he may have some lawyers, because the other guys are certainly already doing that, and in a close election you could anticipate in some of these states you are going to end up in court. It's the American way.

McConnell said the 2020 presidential election "underscores the beauty of the Electoral College."

So we ought to be grateful for the Electoral College in a close presidential election like this. There will be finality reached in 50 separate places; it may take a while for the voting to finish, and both sides will probably be lawyered up if it's a close election. That has happened before and could well happen this time.

The Trump campaign has filed suit in Pennsylvania and Michigan to halt ballot counting "until meaningful access has been granted." It also is demanding to review ballots that were opened and counted "while we did not have meaningful access."

As President Trump tweeted on Wednesday: "Our lawyers have asked for 'meaningful access', but what good does that do? The damage has already been done to the integrity of our system, and to the Presidential Election itself. This is what should be discussed!"

McConnell on Wednesday said he thinks it's "absurd" for states to mail unsolicited ballots to registered voters:

They do that in Washington, D.C. I know people in Washington who live in rental apartments who have received ballots from--addressed to six different people who used to live there at some point. To me, that guarantees the opportunity for fraud.

Most states don't do that. There is some verification process that you are who you say you are, and so it's not a massive problem, but there are systems states can adopt. For example, California has what is called ballot harvesting, so you can go around and collect ballots from people and turn it in for them.

Fortunately, most states don't do that, and my personal view is it's none of the federal government's business how states decide to conduct their election. I mean, I think that has been for 230 years a state decision, and we have to adapt to how states choose to do it. Perfectly okay to complain about a particular system if you don't like it, but ultimately, if there's a dispute over it, it's going to be resolved in court.