McConnell Explains 'What Democrats Have in Mind' for America: 52 States, End of Filibuster... 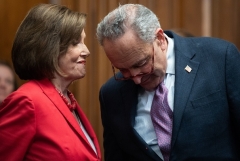 (CNSNews.com) - What would our country look like if Republicans lose their slim Senate majority in November?

He spoke to Fox News's Dana Perino on Thursday:

Well this is not your father's Democratic Party. They've all gone hard left. They will get rid of the filibuster in the Senate, thereby eliminating the potential for any serious opposition.

They'll admit the District of Columbia is a state and Puerto Rico is a state, giving them four new Democratic senators in perpetuity. They'll pack the Supreme Court, the circuit courts, the district courts.

And then they'll turn to the economy, they'll over-regulate and over-tax, like they always do, and America won't look two years later like it does today.

That's what the Democrats have in mind. They need to be stopped. The Senate is the firewall against that sort of thing. And that's what's at stake for the American people if they choose to go in the other direction and give the Democrats the entire government.

McConnell conceded that Senate Republicans "have a lot of exposure" in this election cycle:

"This is the big, big class that took the majority back in 2014. I've got 23 members up. Democrats only have 12. We knew this was going to be a struggle.

I" think it's a 50/50 proposition. The outcome of the Senate could go either way. We have air tight races in Montana, Colorado, Arizona, Iowa, North Carolina, Maine and Georgia. It's like a knife fight in an alley in every one of these places," McConnell said.

"I feel good about where we are, but look none of these races are either lost or won at this point."

McConnell was a bit more optimistic about the Michigan Senate race, where Republican John James is running against incumbent Democrat Sen. Gary Peters:

"Yes, he's a fabulous candidate," McConnell said about James. "The Michigan race is the surprise race, the one to keep an eye on.

"James is running a terrific campaign against the incumbent. He's outraced him a number of quarters, which is quite unusual against an incumbent senator, for a challenger to do that. I'm very optimistic about our chances in Michigan," he said.