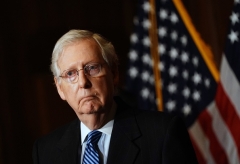 (CNSNews.com) - A $900-billion COVID relief bill passed both the House and the Senate on Monday, after months of delay and partisan bickering.

I said back in July what the country needed was a package roughly a trillion dollars focused on kids in school, small businesses, health care providers, and direct cash payments. We tried to pass -- we started advocating that in July and August. The talks were unproductive.

So, I essentially put that bill on the floor of the Senate in both September and October. Not a single Democrat supported it. Their view was: Give us everything we want, or we won't give you anything.

Well, so, it's noteworthy that, at the end, they finally gave us what we could have agreed to back in July. I think what held it up was, they did not want to do anything before the presidential election. I think they felt that that would disadvantage the president.

But, look, we have finally got it done. We got it done in exactly the same amounts and with the same configuration that we would have been able to do back in the summer, but for all the intervening election shenanigans on the side of the speaker and Democratic Leader -- Schumer.

Pelosi and Schumer refused to compromise with Republicans until now, apparently hoping voters would blame Republicans -- specifically, Mitch McConnell -- for the delay, hurting their electoral chances.

McConnell expects Democrats to produce another relief bill after Joe Biden takes office in January: "If, after the new administration comes in, they want to advocate more, we will take a look at it, based upon conditions in the country at that time.

"But, look, the only thing that will stop this dilemma is the vaccine. And it's going out, being distributed all over the country. We're going to get the country vaccinated as rapidly as we possibly can. That is the only way we ultimately get a handle on this problem."

McConnell said "liability relief" for small businesses will have to be included in the next bill:

"Yes, I think liability relief is really important," McConnell said. "It's not just for small businesses, Dana. It's universities. It's nonprofits. It's hospitals, doctors, nurses. This epidemic of lawsuits is already developing. These people need to be protected, because they were doing the best they can with an unknown disease.

"And if there is another coronavirus relief bill after the 1st of the year, I'm going to insist that liability protection for these universities and health care providers is a part of it."

The $900-billion package passed on Monday includes a $1.4 trillion omnibus spending bill, and, according to the Associated Press, "thousands of pages of other end-of-session business."

The COVID relief section contains an extra $300 in unemployment insurance (temporary); a $600 direct payment to many Americans; and subsidies for businesses facing closure due to the pandemic.