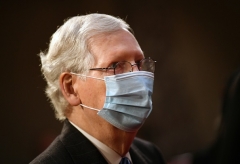 "They keep dropping things that are toxic. And I think the reason for that is, there's internal pressure among Senate Democrats to make it a little less bad. But, at the end of the day, my guess is, they all fall in line, and it'll pass with every single Democrat for it and every single Republican against."

Fox News's Martha MacCallum asked McConnell if there's any chance that Democrats Joe Manchin and  Kyrsten Sinema -- both of whom represent Republican majority states --- might vote against the $1.9 trillion bill, only 10 percent of which deals with COVID relief.

"Well, I doubt it in the end," McConnell said.

"There is a chance, however, that they may join us in slimming it down some, probably nowhere near as much of a slim-down as the situation argues for. But any amount we can reduce the size of this is a good thing for the -- for the country. And I think there's at least a chance that one or two Democrats could join all of us and spend a little bit less."

McConnell said the American people expect Republicans "to stand up to this left-wing administration that's taking the country in the wrong direction."

Repeating something he's said before, McConnell said the actions of the Biden administration are unifying the Republican Party:

“We have had some internal back-and-forth, and it's been widely covered. But nothing has unified the Republican Party in both the House and the Senate faster than reacting to this new left-wing administration.

“So, we're looking forward. We're not going to look backward. We're looking forward, dealing with the problems America has today, not the problems it had yesterday. And, as I said, I have sensed in our conference, and I think in the House Republican Conference as well, a new sense of unity, pulling together to oppose this left-wing administration.”

On two other subjects, McConnell said he "absolutely" supports the re-election of Alaska Sen. Lisa Murkowski, a liberal Republican who often votes with Democrats.

"We support Senator Murkowski. We support all of our Republican incumbents," McConnell said. "She's in very strong shape in her home state of Alaska. There's nobody going to come close to beating Lisa Murkowski when she runs for reelection next year.”

McConnell also said Homeland Security Secretary Alejandro Mayorkas is "absolutely incorrect" in saying there is no crisis at the Southwest border:

“And the crisis was created by the administration sending a message to desperate people who want to come here that just hang on, you will get in sooner or later. And, of course, the Mexican government then will become less cooperative.

“One thing the previous administration did an excellent job of, by any objective standard, was border security. And all of that is being undone very quickly in this new administration. They own this crisis at the border. They created it. And they could stop it if they chose to,” McConnell noted.