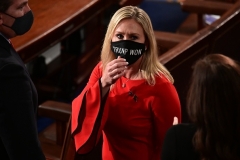 Rep. Marjorie Taylor Greene (R-Ga.) wears a "Trump Won" face mask as she arrives on the floor of the House to take her oath of office on January 3, 2021.(Photo by ERIN SCOTT/POOL/AFP via Getty Images)

(CNSNews.com) - The House Rules Committee will meet on Wednesday to discuss "removing a certain member from certain standing committees of the House of Representatives."

The member in question is Rep. Marjorie Taylor Greene, a freshman Republican from Georgia, who sits on the House Education and Budget Committees. Greene has been blasted as a "menace" by Democrats and as a "cancer" on the Republican Party by Senate Republican leader Mitch McConnell.

In a statement released to the media on Monday, McConnell wrote:

Loony lies and conspiracy theories are cancer for the Republican Party and our country. Somebody who's suggested that perhaps no airplane hit the Pentagon on 9/11, that horrifying school shootings were pre-staged, and that the Clintons crashed JFK Jr.'s airplane is not living in reality. This has nothing to do with the challenges facing American families or the robust debates on substance that can strengthen our party.

Rep. Debbie Wasserman Schultz (D-Fla.), a co-sponsor of H. Res. 72, the resolution to strip Greene of her committee assignments, told MSNBC on Saturday that Greene "is a menace who needs to be neutered and rendered powerless.”

“Either she needs to be expelled, which because that takes a two-thirds vote of the house of representatives, is less likely,  or she certainly needs to be…censured by the House of Representatives.

“But at the very least, because that probably won't shame her, she'll wear that as a badge of honor, we need to make sure that she is rendered essentially inoperable and neuter her and prevent her from being the menace that she clearly is,” Wasserman Schultz said.

Greene responded to her impending punishment in a few Monday evening tweets:

"If Democrats remove me from my committees, I can assure them that the precedent they are setting will be used extensively against members on their side once we regain the majority after the 2022 elections. And we will regain the majority, make no mistake about that."

In another tweet, she wrote: "The real cancer for the Republican Party is weak Republicans who only know how to lose gracefully. This is why we are losing our country."

Greene also tweeted earlier Monday: "The DC Swamp and the Fake News Media are attacking me because I am not one of them. I am one of you. And they hate me for it."

Among her first acts in office, Greene filed articles of impeachment against Joe Biden "due to his abuses of power as Vice President."