McCaul: 'We Do Worry About Short Tactical Nuclear, If (Putin) Gets Too Desperate' 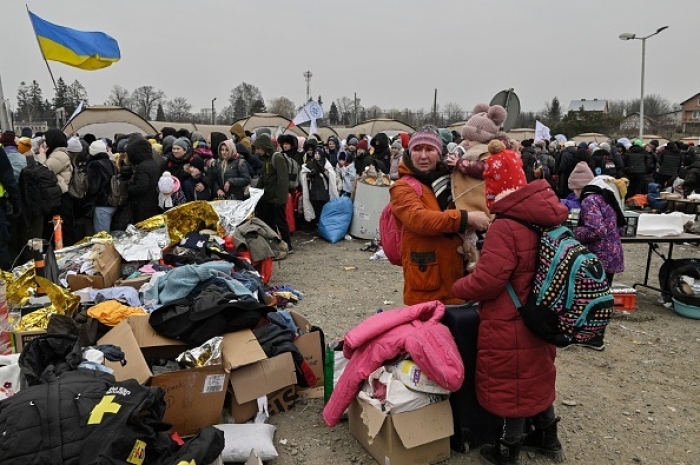 More than 1.5 million people, including those seen here, have fled Ukraine since the start of the Russian invasion, according to the latest UN data on March 6, 2022. (Photo by LOUISA GOULIAMAKI/AFP via Getty Images)

(CNSNews.com) - Rep. Michael McCaul (R-Texas), the ranking Republican on the House Foreign Affairs Committee, visited the Polish-Ukraine border with other U.S. lawmakers this weekend, meeting with desperate refugees driven out of the homes and their country by Russian President Vladimir Putin's unprovoked war.

McCaul told CNN's "State of the Union" with Jake Tapper he doesn't think Putin would attack Poland or other NATO allies: "At least, you would hope not," he said.

But he added that things could get worse for non-NATO countries:

"We do worry about short, tactical nuclear, if he (Putin) gets -- he gets too desperate. I would say, Georgia, Moldova are probably more vulnerable, because they aren't in the NATO club, if you will. But our forces that we have moved from Germany now to Poland have really fortified Poland.

“And I really give the people of Poland and the government so much praise for taking in these refugees and taking care of them and our NATO allies for coming together strong. This is going to be very helpful in this effort.”

McCaul said seeing all the refugees struggling their way into Poland "was a very emotional moment."

"A lot of the members were actually in tears, to see these mothers and their children and their fathers and husbands have to go back to fight this war against Putin. It was absolutely -- I have to say, this whole thing, historically, I'm reminded of when Hitler invaded Poland, the country I'm in right now. This seems eerily similar.

The congressman said he "strongly urged" Secretary of State Antony Blinken to give U.S. fighter jets to Poland, so Poland can send its Russian-made jets to Ukraine. "The Ukrainians know how to pilot those better," he said.

"The Ukrainians can fly Russian MiGs. But then the -- Poland wants a backorder. And that may be possibly F-16s. And the role I have -- and the chairman and I sign off on these foreign military weapon sales.

"We're not going to put our troops in there. But you know what? We can help the Ukrainian people win this war. I have never seen a more resistant force. We were told this whole thing was going to be over in three days. Now we're on the 10th day, and we're still seeing a lot of weakness on the part of the Russians.

McCaul said he also urged Secretary of State Blinken to stop U.S. imports of Russian energy. "I think, symbolically, the idea that we're funding Putin's war machine and, quite frankly, genocide that we're seeing on the television, that has to stop."