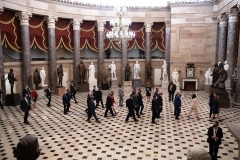 Statuary Hall in the US Capitol as of April 28, 2021. (Photo by GREG NASH/POOL/AFP via Getty Images)

(CNSNews.com) - The U.S. House of Representatives voted 285-120 on Tuesday to remove more statues of Confederates from the U.S. Capitol.

Sixty-seven Republicans voted with 218 Democrats in support of the bill, and one of those voting for removal was House Minority Leader Kevin McCarthy (R-Calif.), who seized the occasion to note past Democrat racism, even as he condemned present Democrat attempts to stoke racial division in the United States.

"The bill we're voting on today we voted (on) before," McCarthy said in a floor speech. "And I supported it. I support it now. But let me state a simple fact: All the statues being removed by this bill are statues of Democrats," McCarthy said.

(The House resolution removes statues of John C. Calhoun, Charles Aycock, and James P. Clarke, all of whom defended slavery and fought for the Confederacy. And it replaces a bust of the late Chief Justice Roger B. Taney, author of the Dred Scott decision, with one of Thurgood Marshall, the first African American Supreme Court justice.)

McCarthy noted that the Confederate portraits removed from the Capitol one year ago were all of Democrats as well. And he noted that the statues identified in the House resolution were sent to the House of Representatives by states controlled by Democrats.

"I think the bill should go further," McCarthy said. "Maybe it's time the Democrats change the name of their party. They may be desperate to pretend their party has progressed from their days of supporting slavery, pushing Jim Crow laws, or supporting the KKK. But let's be honest. At anyplace, at anytime, if those fundamentals rest somewhere, we cannot let them.

“Let's go through some of the words and actions of a few Democrats," McCarthy continued:

Just a few years ago, then-Vice President Joe Biden praised Democrat Senator Robert Byrd [D-W.Va.]. He was the exalted cyclops of the Ku Klux Klan. In his eulogy for Byrd, he said, for a lot of us, he was a friends, a mentor, and a guide.

Another leading Democrat who praised Byrd at the time was Speaker Pelosi. She called Byrd a friend, a great person, and a great American patriot.

Madam Speaker, today, the Democratic Party had doubled down on what I consider the shameful history by replacing the racism of the past with the racism of the critical race theory. They continue to look at race as the primary means of judging a person's character.

We saw this just last week. Senate Democrats voted to confirm one of President Biden's appointees who said, let me quote -- "We must do everything in our collective power to realize Dr. Kendi's vision for America."

Let me be clear about what that vision is. (Ibram X.) Kendi, the author of "How to Be an Anti-Racist," proposed in his book that the solution to past discrimination is present discrimination. Now that's what the person who is now in charge of the personnel of the entire federal government is endorsing.

McCarthy noted that the U.S. Navy has included Kendi's book on its official reading list for sailors. And the U.S. Education Department has praised The 1619 Project, holding it up as an example of what children should be taught.

"Critical race theory is the governing ideology of what we're now finding in the Biden Administration," he said. "By advocating for it, Democrats continue to fuel hatred and division across the country."

McCarthy said he agrees with Sen. Tim Scott, who said America is not a racist country.

McCarthy wondered what this country might look like if President Abraham Lincoln had not been assassinated, given Lincoln's call for "malice towards none." But with Lincoln gone, Democrats passed Jim Crow laws in the South.

"I'll vote for this bill today, just as I voted for it before," McCarthy repeated. "I applaud the Democrats for standing up, removing Democrat statues (that) Democrat-controlled majorities sent to a Democrat-majority House who accepted them. It is about time.

“But...to continue along in a critical race theory where you would teach an individual that they're right or wrong based upon the color of skin goes against everything that we're voting about today."