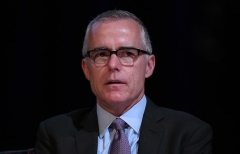 But no one is suggesting that he may be violating the Logan Act, an archaic federal law that bars unauthorized American citizens from negotiating with foreign governments.

“The Logan Act was not used as a basis to go after General Flynn,” Former FBI Deputy Director Andrew McCabe told the Senate Judiciary Committee earlier this week.

But was it used as a reason to keep the Flynn case open, just as FBI agents were about to close it?

McCabe dodged repeated questions about the Logan Act put to him by Sen. Ted Cruz (R-Texas).

At one point, a frustrated Cruz told McCabe: “You’re being non-responsive to the question. I didn’t ask about the initiation (of the Flynn case). The Logan Act was a late pretext that was adopted after you investigated him and couldn’t find anything and the career investigators recommended closing it (the case against Flynn).”

McCabe sidestepped most of the questions put to him by Cruz, refusing to “opine,” claiming to be “not aware,” and complaining about being interrupted when he (frequently) avoided a straight answer.

More on McCabe’s dodging and weaving below, but first, some context:

According to FBI Agent Peter Strzok’s handwritten notes on the Jan. 5, 2017 White House meeting  “VP,” meaning Biden, brought up the “Logan Act” (the words are in quotations) in connection with Flynn’s phone calls with the Russian ambassador. (Biden this past May said, “I know nothing about those moves to investigate Michael Flynn.”)

Flynn was later charged with lying to the FBI about his conversations with the Russian ambassador. He is accused of falsely stating that he did not ask Russia’s ambassador to the United States to refrain from escalating tensions in response to U.S. sanctions imposed by the Obama administration. Russia complied with Flynn’s request.

At Tuesday’s hearing of the Senate Judiciary Committee, Sen. Cruz asked former Deputy Director of the FBI Andrew McCabe, “Did you support using the Logan Act as a basis to go after General Flynn?”

“The Logan Act was not used as a basis to go after General Flynn,” McCabe responded.

Cruz asked him, “You’re aware of the White House meeting where the notes show that Vice President Biden at the time directly suggested using the Logan Act to go after General Flynn?”

“I’m not aware of that,” McCabe said.

“You’re not aware of that. Well, those are notes from your colleague” (Peter Strzok), Cruz said.

“Senator, I can say what – the reasons that I agreed with and approved opening the case – and that was because we thought that General Flynn might be having inappropriate contacts with Russia – that’s why we opened the case.”

“Inappropriate,” Cruz interrupted.” So the only basis – this is a decorated three-star general. The only basis that was put forward were what I think was a bogus political persecution and prosecution – was an alleged violation of the Logan Act, which has never been used to prosecute anybody in the history of the Department of Justice. True?” Cruz asked.

“No I don’t believe that’s true," McCabe said. “No, I was referring to why we opened the case against General Flynn. I’m not aware of prosecutions of the Logan Act.”

Here Committee Chairman Sen. Lindsey Graham cut in: “If I may, I think for those who are listening, we’re talking about a conversation between General Flynn and the Russian ambassador after the election, while he’s the national security advisor-in-waiting.”

Cruz agreed: “He’s the incoming national security advisor, and Mr. McCabe – yesterday, on MSNBC, Ben Rhodes, the former deputy national security adviser to President Obama, said that foreign leaders are already having conversations with Joe Biden, quote, ‘talking about the agenda they’re going to pursue January 20th.’ Mr. McCabe, based on that testimony, do you believe Joe Biden is violating the Logan Act?”

“Take it on faith he said what I read. Assuming that quote is accurate – it’s a verbatim quote – is that a violation of the Logan Act under any plausible theory?” Cruz asked again.

“All right, you’re a lawyer,” a frustrated Sen. Cruz interrupted McCabe. “Have you ever answered a hypothetical in court? If it is correct that I am accurately quoting it -- something that the Department of Justice frequently did wrong in this investigation -- if that is what Ben Rhodes said, if Joe Biden is talking with foreign leaders right now, does it violate the Logan Act, yes or no?”

“I’m not going to opine on a hypothetical question about what the Biden campaign--” McCabe started to say.

Cruz interrupted: “OK, he is talking with foreign leaders, and it doesn’t violate the Logan Act because the Logan Act is unconstitutional, which is why it’s never been used to prosecute anyone. You authorized using it to go after General Flynn as part of a political persecution.

“I can give you the answer,” Cruz continued. “Hell, no, Joe Biden is not violating the Logan Act. The reason you won’t say it is because that was your flimsy political basis to go after a decorated war hero because you disagreed politically with President Trump.”

“Sir, none of that is correct,” McCabe said.

Cruz interrupted: “It is your testimony the Logan Act was not a predicate for the FBI and DOJ investigation into General Flynn -- really?”

“There were no discussions of the Logan Act,” McCabe said.

“There were no discussions of the Logan Act at the FBI or DOJ,” Cruz repeated. “That is your testimony under penalty of perjury before this committee. And I warn you, there is abundant evidence that there were.”

“Senator, if you’re not going to let me finish my answer, I’m not going to be able to accurately answer your question,” McCabe said.

“No, Senator, that’s where you cut off my testimony. I would like to finish my--”

“Thank you,” McCabe said. “When we initiated the case against General Flynn, it was not initiated for or as a result of any discussion--”

“Mr. McCabe, you’re being non-responsive to the question,” Cruz interrupted. “I didn’t ask about the initiation. The Logan Act was a late pretext that was adopted after you investigated him and couldn’t find anything and the career investigators recommended closing it" (the case against Flynn).

Remarkably, McCabe told the committee he doesn’t remember if he was the one who ordered the Flynn investigation to remain open on January 4, just as FBI agents were about to close it, having found nothing to incriminate Flynn.

According to court documents (pages 4 and 5), FBI Agent William Barnett told FBI and DOJ officials he was working to close the Michael Flynn case on Jan. 4, 2017 when he received a message not to close it because FBI  Agent Peter Strzok had new information to add to the file. "At the time, Barnett was told there was a potential Logan Act violation. Barnett was not familiar with the Logan Act and had to research the matter,” the court document says.

Sen. Cruz asked McCabe at Tuesday’s hearing, “Were you the one who made the decision to keep the (Flynn) investigation open?"

“I don’t remember making that decision, but I certainly supported keeping the case open,” McCabe replied. "I think that it was the right move to continue investigating once we uncovered information that we found.”

When Cruz wrapped up his questioning of McCabe on Tuesday, Committee Chair Graham said, “I want the American people to understand, was it wrong for General Flynn to talk to the Russian Ambassador since he was going to be the new incoming national security advisor?

McCabe responded, “Our concerns about General Flynn’s contact with Ambassador Kislyak was that the general might be maintaining some sort of hidden or deniable contact in that he might have been the person in the campaign who coordinated efforts with the Russian government.

“Let me just say this,” Graham told the committee:

“General Flynn told the FBI agents, you have the transcripts, you know what I said” (to the Russian ambassador).

“The FBI agents came back and said they didn’t think that he lied, but the problem we have here is, is this is after the election is over. That the national security advisor has every right in the world to be talking to the foreign governments, foreign ambassadors.

“It’s going on as I speak. I’m sure the Biden administration, believing they have won, is beginning to reach out to the foreign governments to talk about their agenda, whether it be China or anybody else. This whole idea that you would surveil the incoming national security advisor after the election, after the professionals in the field said there’s no there-there – it bothers a lot of us,” Graham said.

A brief history of the FBI's Flynn investigation:

According to Inspector General Michael Horowitz's report, the FBI opened its counter-intelligence investigation into Michael Flynn in August 2016, when he was an adviser to the Trump campaign.

The FBI justified its Flynn investigation by stating that he "may wittingly or unwittingly be involved in activity on behalf of the Russian Federation which may constitute a federal crime or threat to the national security." The FBI noted that Flynn had ties to state-affiliated entities in Russia and traveled there in December 2015.

In an interview with DOJ and FBI officials on Sept. 17, 2020, FBI Case Agent William Barnett said he was working on a document to close the Flynn investigation on Jan. 3 and 4, 2017 because no derogatory information had been found.

But according to court documents, "Before the intended case closing took effect, the FBI learned of communications between Mr. Flynn and Russian ambassador Sergey Kislyak that had taken place in late December 2016 and which touched on matters of foreign policy.

Page reacted with surprise and relief.

Strzok, moreover, instructed agents to “keep it open for now” at the behest of “the 7th Floor.” Strzok indicated that there was a “[n]eed to decide what to do with him.”

As of January 4, 2017, then, the FBI kept open its counterintelligence investigation into Flynn based solely on his calls with Kislyak — the only new information to arise since the FBI’s determination to close the case.

On Jan. 5, at a White House meeting with President Obama, Vice President Biden, FBI Director Comey and others, Biden mentioned the "Logan Act," according to Peter Strzok's cryptic, handwritten notes.

Andrew McCabe called Flynn to set up the Jan. 24 interview in Flynn's White House office. This was four days after Trump was inaugurated.

Court documents note that after the interview, the FBI agents expressed uncertainty as to whether Mr. Flynn had lied. FBI agents reported to their leadership that Mr. Flynn exhibited a “very sure demeanor” and “did not give any indicators of deception.” Both of the agents “had the impression at the time that Flynn was not lying or did not think he was lying.”

When Director Comey was asked, based on his evaluation of the case: “Do you believe that Mr. Flynn lied?” Director Comey responded: “I don’t know. I think there is an argument to be made he lied. It is a close one.”

On November 30, 2017, the Special Counsel’s Office filed a criminal information against Flynn, charging him with a single count of making false statements. Flynn pleaded guilty to that offense, but moved to withdraw that guilty plea on January 14, 2020. The Justice Department told the court in May 2020 that it wanted to drop the prosecution of Flynn, but federal District Judge Emmet Sullivan has so far refused to do so, and the case remains in legal limbo.