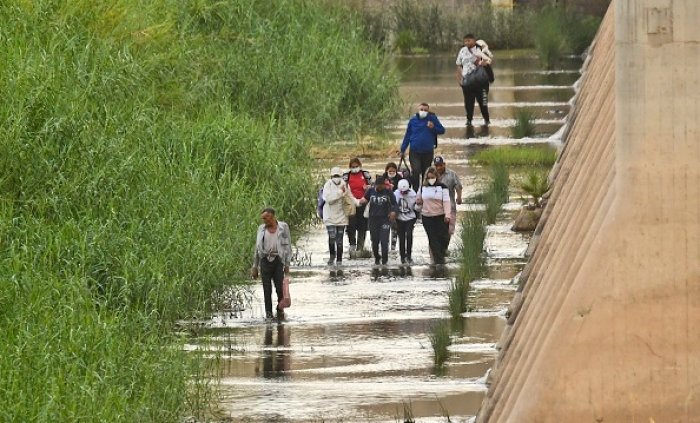 Migrants attempting to cross illegally into the U.S. from Mexico are later detained by U.S. Customs and Border Protection in San Luis, Arizona. (Photo by Nick Ut/Getty Images)

(CNSNews.com) - At a recent hearing of the House Judiciary Committee, Homeland Security Secretary Alejandro Mayorkas apparently did not know if 42 illegal aliens on the terrorist watch list or the no-fly list had been released into the country.

He promised to provide Republican Rep. Jim Jordan "the data," which was not at his fingertips. By Sunday, Mayorkas had it figured out, telling "Fox News Sunday":

"Oh, so yes, and I did not want to speak -- misspeak in response to Ranking Member Jordan's question, because we know where those 42 individuals are, on the TSDB, the terrorist screening database.

Mayorkas said Americans "shouldn't be worried about the 42. We've got -- we've got a handle on it, and when I say, Bret, it's not the Department of Homeland Security alone. It's the Federal Bureau of Investigation. It's our entire enforcement and intelligence enterprise."

Mayorkas said the Homeland Security Department, which includes U.S. Customs and Border Patrol and Immigration and Customs enforcement, is not just "letting people loose and just letting them come in."

Host Bret Baier asked Mayorkas if he knows how many illegal aliens encountered at the southwest border have been released since Biden took office.

Eventually, Mayorkas agreed that the number is at least 836,000 since Biden became president, but first he wanted to define the word "release."

"Do you know what release means, Bret?" Mayorkas asked:

Mayorkas said "just over 86 percent" of people released with notices to appear actually show up.

"OK," said Baier: "So the numbers are that -- according to the U.S. district court which you submitted -- the DHS has directly released at least 836,000 aliens into the United States since January 21st. Then, you add the...207,000 unaccompanied alien children, UACs, and then your Border Patrol estimate, somewhere from 200,000 to 400,000 got-aways, in other words, encounters that...evade apprehension.”

"And got-aways have been a challenge...from the beginning," Mayorkas interrupted.

"But that matches your numbers roughly?" Baier asked.

"I believe so," Mayorkas said.

Mayorkas also agreed that if Title 42, the COVID public health measure, is lifted on May 23 as the Biden administration has planned, the surge of illegal immigration will severely strain the system, which is why -- precisely why, Bret, we've been planning since September of 2021 for the eventual end of Title 42, an authority that the CDC exclusively controls."

Mayorkas is calling for Congress to pass immigration reform as a solution to the overwhelmed border. In the meantime, in the Fiscal Year 2023 budget, "we asked for more resources, more personnel, more technology."

Host Baier asked Mayorkas to "name one thing that would help you deport more illegal immigrants that Congress can do?"

"What we are talking about when we talk about legislation is building the orderly legal pathways for people to obtain relief under our laws," Mayorkas said.

That would include the cooperation of other countries in Central and South America.

As Mayorkas told CNN on Sunday, the Biden administration is calling for "a regional approach to what is a regional challenge.

"And we need countries to the south to manage their borders. This is not a phenomenon that the United States experiences alone. There are 1.8 million Venezuelans in Colombia. The Nicaraguans comprise almost 2 percent of the population in the small country of Costa Rica.

"We're seeing migration because of challenges that are not restricted to this area. They are global."