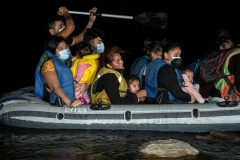 "That is the most effective means, because we're not going to construct a border wall on the ragged and jagged cliffs in certain parts of the border."

Yet the $1.2-trillion bipartisan infrastructure bill that President Biden signed with great ceremony on Monday does not provide "fundamentally advanced technology" or any other specific item to better protect the southwest border from record flows of illegal immigration.

Section 14007 of the bill authorizes Customs and Border Protection to transfer money to the Bureau of Indian Affairs "to maintain, repair, or reconstruct roads" that are primarily used by CBP.

Under the heading "General Services Administration," the Infrastructure Investment and Jobs Act provides $3,418,008,000 for "construction and acquisition, and repairs and alterations of border stations and land ports of entry."

Title V of the Act provides $330,000,000 to the Department of Homeland Security for "furniture, fixtures, and equipment for the land ports of entry" that will be "modernized" with funding provided to the General Services Administration, as noted in the sentence above. Title V also provides DHS with $100,000,000 for "Procurement, Construction, and Improvements" at land ports of entry.

The bill, which passed with Republican input and support, does not mention border security.

But that didn't stop Republicans on the Judiciary Committee from complaining about President Biden's open borders at Tuesday's hearing.

A number of Republicans, including Sen. Chuck Grassley (R-Iowa), told Mayorkas the uncontrolled situation at the border is "due to the reckless policies of this administration."

"When you terminate physical barrier constructions, when you severely restrict the ability of ICE to deport illegal immigrants, when you terminate the remain in Mexico policy, when you rollback asylum cooperative agreements, when you gut Title 42, when you openly support sanctuary cities policies, then you should not be surprised when there's a surge at the southern border," Grassley told Mayorkas.

When you allow the ACLU and open-border immigration activists rather than career, law enforcement professionals to dictate the terms of your immigration and border policies, then you shouldn't be surprised when record-shattering numbers of people start showing up at the borders to take advantage of that situation.

In choosing to actively ignore the immigration laws passed by Congress and in choosing to pursue policies that encourage unprecedented levels of uncontrolled illegal immigration to the United States, this administration and this department have failed on both counts.

Sen. Mike Lee (R-Utah) said the Department of Homeland Security under Mayorkas "has clearly failed in its mission to maintain operational control of its borders."

The department itself acknowledges how important it is. Over 2 million people have likely crossed over our southern border illegally this year with no end in sight. We've seen no concrete plan for stopping these border surges. Instead, your department's focused on climate change.

These facts seem to indicate, Mr. Secretary, that Americans cannot hope to keep fentanyl out of their communities, that terrorists and gang members can't be kept out of their neighborhoods, and criminal aliens off their streets.

As long as you're in charge of the Department of Homeland Security and running it the way that you've been running it, this cannot continue for the safety of the American people, including people like the woman who was recently raped in open sight in a Philadelphia subway train just recently by someone who shouldn't have been here in the first place, who had a criminal alien background.

Lee told Mayorkas, "I implore you; you've got to fix this. Fix it or step down."

Mayorkas told the Judiciary Committee that illegal immigration is at "a historic level," and he said the immigration system is "fundamentally broken."

"Congress must pass legislation to fix it. In the meantime, we are taking action within our authorities," Mayorkas said. To address "irregular migration," he said, "We must invest in addressing root causes, creating legal pathways, and ensuring swift adjudication of asylum claims." He did not mention beefed-up border security.

Sen. Dick Durbin (D-Ill.) told the committee he chairs, "It is easy to criticize the executive branch, but every member of this committee needs to look in the mirror as well. Only Congress can actually fix our broken immigration system.

“Of course, I'm concerned about the crisis at the southern border, every member of Congress should be. The question is, not what happened, but what are we going to do about it? Congress, the Senate, are we proud of our failure to pass meaningful immigration reform for the last 35 years? Congress bears responsibility for this," Durbin said.

For years, comprehensive immigration reform, strongly supported by Durbin, has failed to muster bipartisan support in Congress. That has allowed the executive branch and the courts to set the rules.

Those actions included the highly publicized construction of a border wall, which the Biden administration scrapped; the remain in Mexico policy, which forced would-be asylum seekers to wait in Mexico pending resolution of their asylum claims; and a “zero tolerance” policy that put adult border-crossers in detention, separating some from their children, until the courts struck it down.

Also under Trump, the federal Centers for Disease Control invoked Title 42 of public health law, requiring the expulsion of noncitizens due to the coronavirus pandemic. (This provision continues for the time being under President Biden.)

Even before Biden was elected in November 2020, he was sending welcoming signals to people in Mexico, Central America and all over the world.

“Can we agree that you don't have to be Mensa material to understand that's an open border policy?”