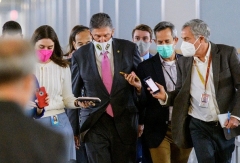 (CNSNews.com) - In lengthy interviews on cable news shows Thursday morning, Sen. Joe Manchin (D-W.Va.) defended his current opposition to the Democrats' catch-all, $1.75 trillion social agenda bill, which will not pass without his vote in the Senate.

Manchin is under tremendous pressure to go along with the progressive wing of the Democrat Party, and as he aims for bipartisanship, he described a "hostile" work environment.

"I talk to everybody -- but I always talk to my Republican friends, finding if there is a pathway forward on anything. I need help. We all need help. We need to work together," Manchin told CNN's "New Day" with John Berman.

In today's divided country, and divided government we have, and divided politics that we have, you have to work a little bit harder. How many people did you see on the floor, working and talking both sides? How many times do you see that, John? Ask them how many times they had coffee with each other. Ask them how many know each other's wives or children and what their pleasures are as far as sports or recreation. Why don't we find out who we are? Why don't we talk to each other rather than talking through and over?

John, I go -- let me just tell you this, you want to know what's wrong with the place. I go to work in a hostile working environment every day. If you're a Democrat and a Republican is up for election, you're supposed to be against that person. If Donald Duck's running against that person, you're supposed to give money from your PAC to help the other person beat the person that you have been working with.

And even sometimes they'll say, can you come campaign against so and so, and then we come back on Monday and here's the person that we have given money against and here's the person that we're supposed to give -- basically go out and work against, saying, hey, could you sign on this amendment for me, work on this amendment for me. How well do you think that's going to work?

I've never done that. If we do anything to change this place, there should be an ethics law against us campaigning against each other, against us basically sending money to the candidate, against a sitting colleague. These are people you're working with. You have an obligation and responsibility to get something done. And you can't get something done if you're the enemy on the other side every time there's an election.

As for the so-called Build Back Better/reconciliation package, Manchin said he agrees with some of what's in it. But he doesn't believe the partisan reconciliation bill is the right way to establish lasting programs, such as paid family leave.

Manchin said his colleagues know exactly where he stands on the reconciliation/Build Back Better package:

The problem is, John, we're divided. There is 50/50 in the...Senate. How many times does that happen? A complete split, not that many times in history. So we don't have the numbers that FDR had or that Lyndon Baines Johnson had in order to get some major major legislation done. We don't have those.

So we have to come to realization -- what we have and deal in good faith that we can do at least something, and I have been very, very straightforward and pre-k, great, we should do it, 3 and 4-year-olds. I started when I was governor and expanded it, just the 4-year-old program in my state of West Virginia. But I think that would be wonderful.

Child care, I think that's very, very needed because it helps people go to work...I think basically in home services, in home care is something that would be very helpful for people that want the dignity and respect to live in their home as they grow older with a little assistance.

Manchin said the election shows that this is a "center-right country…And we ought to be able to recognize that."

He has consistently expressed concern about paying for trillion dollar bills on top of trillion dollar bills: "People are scared to death in West Virginia about the high rising costs of gasoline, of food, now of utilities, the basic needs of life is going up and making more of a burden, no matter how much money we send out."

Manchin said paid family leave should be accomplished through "regular order," in a bipartisan way to "make sure it's lasting." And he has said all along that he opposes expanding safety net programs such as Medicare, which already face insolvency.