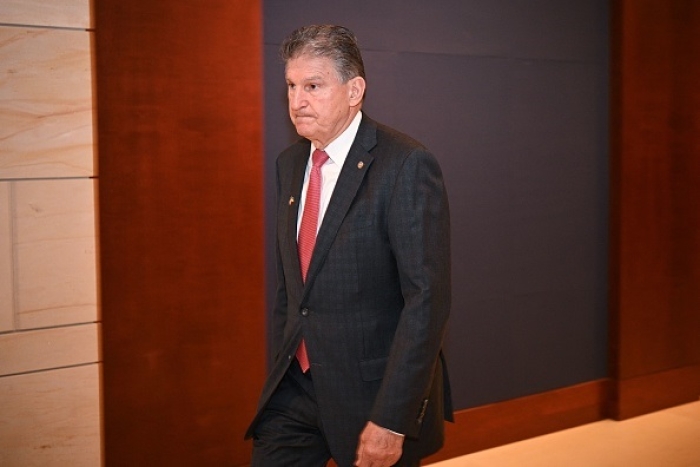 Senator Joe Manchin (D-W.Va.) has suddenly agreed to support a scaled-down Democrat bill that, by most accounts, will raise taxes and prices for many Americans. (Photo by MANDEL NGAN/AFP via Getty Images)

(CNSNews.com) - Sen. Joe Manchin, a West Virginia Democrat, infuriated Democrats by refusing to pass the Biden administration's multi-trillion tax-and-spend "Build Back Better" agenda. At the time, he said it would stoke inflation.

But now he's agreed to approve elements of that same plan -- a scaled down, $400-billion version of BBB that he says will fight inflation.

"And I think it's a great piece of legislation," Manchin told CNN's "State of the Union" with Jake Tapper on Sunday:

"I couldn't get there with Build Back Better. It was $3.5 trillion of spending," Manchin said:

"And this is taking $3.5 trillion dollars of spending down to $400 billion of investment that's definitely going to make a difference in America and everybody's pocketbook. And that's fighting inflation. That's what we're doing.

"So, with that, I didn't want to build anyone -- anticipation up. And then they come down and up and down, like a yo-yo with the -- with all the drama that goes into this. So, I just basically hunkered down with my staff. We have been doing this for -- since April and May, diligently.

"And then we thought it fell apart a couple of weeks ago. We came back, to Chuck's credit. Let's start talking some more. We did, to see if we could scale this thing to where we could basically put it in a position we have it today, which I think is great, a great opportunity.

"It's not a Democrat bill. It's not a Republican bill. It's definitely not a green bill. This is a red, white and blue bill. And it's great for America."

Manchin said again on Sunday that inflation "is the greatest challenge we have in our country right now."

"So, that's what we're fighting. And we started talking again. We got the bill down to where there's nothing inflammatory in this bill, even though there's some naysayers. I'm sure you are going to always hear that. But there is nothing in that.

"We're paying down debt $300 billion. We're increasing production, as far as, if you want to get the gasoline prices down, produce more energy and produce it here in America. That's what we're doing. And we're investing in the technologies for the future energy.

"So we're doing everything to bring manufacturing back, keep people working. And I think it's a great piece of legislation. And in normal times, my Republican colleagues would be for something such as this.

Manchin said the bill will not put "a burden on any taxpayers whatsoever."

But the Wall Street Journal editorial board disagrees, writing on Sunday that the bill "hits U.S. manufacturing especially hard, and it raises taxes on Americans making less than $400,000 a year."

The opinion piece is titled "The Schumer-Manchin Tax Increase on Everyone," and it reads in part:

"The JCT [Joint Committee on Taxation] finds that average tax rates will increase for nearly every income category in 2023 under the bill.

"If Arizona Sen. Kyrsten Sinema and other Democrats want to sign up for this tax ball-and-chain barely three months before an election, they will be responsible for the economic consequences. Their new tax on workers is unlikely to be a political or economic winner."

Sinema has not said whether she will join her fellow Democrats in supporting the Schumer-Manchin bill.