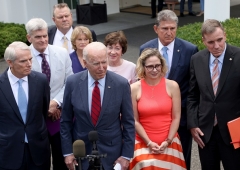 Sen. Joe Manchin (D-W.Va.) is among a bipartisan group of senators who met with President Joe Biden on June 24, all of them apparently agreeing on a compromise physical infrastructure deal. (Photo by Win McNamee/Getty Images)

(CNSNews.com) - Sen. Joe Manchin (D-W.Va.), a pivotal vote in the evenly divided Senate, on Sunday described himself as a "fiscally responsible and socially compassionate" man who wants to find middle ground with both sides.

He's plugging both a bipartisan physical infrastructure deal announced last week (track one); and a Democrats-only plan to pass a much bigger "human" infrastructure bill through the reconciliation process, as long as it's paid for with tax hikes (track 2).

"We have two tracks. And that's exactly what I believe is going to happen," Manchin told ABC's "This Week" with Jon Karl:

And we've worked on the one track. We're going to work on the second track. There's an awful lot of need. And everything they talked about is something that we need.

Jon, I didn't vote for the 2017 tax cuts under President Trump. I thought they were weighted too much towards the high end, if you will. I think we need to make some adjustments. And I'm willing to step forward to make those adjustments. I've been very clear about that.

But we also, Jon, have to take into account where we are in this country, what our debt structure is. We're $28.5 trillion, we cannot continue to add on things that we can't pay for. I've always said this, we're writing checks our kids can't ever cash. And this is going to put a heck of a burden on the next generation. So we have to be cognizant of that.

But there's a lot of need out there, whether it be child tax credits, whether it be helping those kids have a start in life, whether it be fixing a lot of the human infrastructure that has fallen by the wayside, of helping middle class hard-working people have a chance to get ahead and enjoy the American dream. I'm all for that. To what degree, we'll see what we're able to pay for.

"If Republicans don't want to make adjustments to a tax code which I think is weighted and unfair, then I'm willing to go reconciliation. That's how you're able to do it.

"But if they think in reconciliation I'm going to throw caution to the wind and go to $5 trillion or $6 trillion when we can only afford $1 trillion or $1.5 trillion or maybe $2 (trillion and what we can pay for, then I can't be there."

Manchin on Sunday indicated that $6 trillion is more than he can accept:

"The infrastructure bill that we've done in the bipartisan way has pay-fors. We've used money that we've had. We've moved money that we haven't used yet to make sure that it was used in the most productive way. I think we've all done a good job.

"And that's what we have to look for when we do the next -- the next piece of legislation. I understand the concerns. I understand the desires of everybody in my caucus and also on the Republican caucus. I know we can work together," Manchin said. "So many good things, Jon, we can do. We can work this out."

"How far are you willing to go?" Karl asked Manchin, referring to the $6 trillion cost of the second infrastructure bill.

I never thought that the net corporate tax should have been 21 percent. I always felt that 25 was very fair and balanced. So I'm willing to go to 25. I think that basically capital gains should be at 28 percent, not at 21.

Now, let's see when we do all that and make the adjustments, how much money do we have. This is how you run your household. It's how I run my household or small businesses or large businesses. How much can we invest and how much return do we get on that investment?

I want to make sure we pay for it. I do not want to add more debt on. So if that's $1 trillion or $1.5 trillion or $2 trillion, whatever that comes out to be over a ten-year period, that's what I would be voting for.