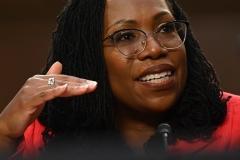 (CNSNews.com) - Supreme Court nominee Ketanji Brown Jackson told the Senate Judiciary Committee on Tuesday that she could not define the word "woman."

Sen. Marsha Blackburn (R-Tenn.) asked Jackson, "Can you provide a definition for the word woman?"

"You can't?" Blackburn asked in surprise.

"Not in this context," Jackson said, half-laughing. "I'm not a biologist."

Blackburn followed up, telling Jackson, "So you believe the meaning of the word 'woman' is so unclear and controversial that you can't give me a definition?"

Jackson responded, "Senator, in my work as a judge, what I do is I address disputes. If there is a dispute about a definition, people make arguments, and I look at the law, and I decide. So I'm not---"

Blackburn interrupted: "So, the fact that you can't give me a straight answer about something as fundamental as what a woman is underscores the dangers of the kind of progressive education that we are hearing about.

"Just last week," Blackburn continued, "an entire generation of young girls watched as our taxpayer-funded institutions permitted a biological man to compete and beat a biological woman in the NCAA swimming championships. What message do you think this sends to girls who aspire to compete and win in sports at the highest levels?" Blackburn asked.

"Senator, I'm not sure what message that sends. If you're asking me about the legal issues related to it, those are topics that are being hotly discussed, as you say, and could come to the court. So I’m unable to--"

Blackburn cut in: "I think it tells our girls that their voices don't matter. I think it tells them that they're second-class citizens. And parents want to have a supreme court justice who is committed to preserving parental autonomy and protecting our nation's children. So I -- let's move on."

No comment from Jackson on 'what schools can teach'

The definition issue arose when Blackburn asked Jackson about Georgetown Day School, a private prep school in Washington, D.C., on whose board Jackson sits.

"And I will tell you that with Georgetown Day School, I found it astounding that it teaches kindergartners, five-year-old children...that they can choose their gender," Blackburn said.

"So is this what you were praising when you applauded the -- I'm quoting you -- 'transformative power of Georgetown Day School's progressive education?' Do you agree that our schools should teach children that they can choose their gender?" Blackburn asked.

"Senator, I am not remembering exactly what quote you are referencing, but Georgetown Day School...is a private school that--"

Blackburn told Jackson, "Yeah, I'm asking, do you agree that schools should teach children that they can choose their gender?"

"Senator, I'm not making comments about what schools can teach," Jackson said.

"Let me ask you this, then." Blackburn said. "The United States versus Virginia, the Supreme Court struck down VMI's male-only admission policy. Writing for the majority, Justice Ginsburg stated, 'Supposed inherent differences are no longer accepted as a ground for race or national origin classifications. Physical differences between men and women, however, are enduring. The two sexes are not fungible. A community made up exclusively of one sex is different from a community composed of both.'

"Do you agree with Justice Ginsburg that there are physical differences between men and women that are enduring?" Blackburn asked.

"Um, Senator, respectfully, I am not familiar with that particular quote or case, so it's hard for me to comment as to whether or not--" Jackson started to say.

Blackburn told Jackson she could submit her opinion on that later, in writing.

"Do you interpret justice Ginsburg's meaning of men and women as male and female?"

"Again, because I don't know the case, I don't know how I interpret it," Jackson said. "I would need to read the whole case."

[For the record, the traditional textbook definition of ‘woman’ is a human being with two X chromosomes, an immutable characteristic that is beyond the scalpel's reach.]