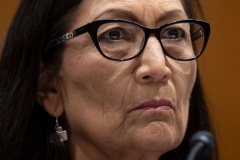 On Wednesday, as she prepared to testify before a Senate Appropriations subcommittee, Interior Secretary Deb Haaland thanked members, telling them, "It's an honor and privilege for me to be here with you today on behalf of the Department of the Interior. It's deeply meaningful to me as the first Native American Cabinet secretary, to be here on the ancestral homelands of the Anacostan and Piscataway people, speaking before you."

According to her biography, Haaland is a member of the Pueblo of Laguna and a 35th generation New Mexican.

"I'm grateful that your voice has been lifted up, and I can see from this budget request that you are taking the opportunity to lift up the voice of others who are too often silenced. From honoring the trust and treaty responsibilities to native communities, to caring for the precious and often sacred lands and animals we're fortunate to have your experience and your perspectives as we confront the challenges facing us today," Merkley said.

The Biden administration's Fiscal Year 2022 budget request for the Interior Department includes $4.2 billion for Bureau of Indian Affairs/Education programs, which is $728 million above Fiscal Year 2021 levels. The focus is on "strengthening tribal sovereignty," Haaland said.

Sen. Merkley (D-Oregon) asked Haaland, "What do you see as the three most important things to be accomplished with the greater investment in Indian affairs?"

She listed broadband Internet service; direct funding to tribes "so they can make the decisions they need to make"; and infrastructure, including running water in places that don't have it.