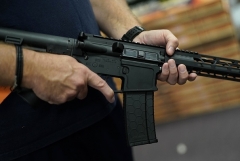 A customer handles an AR-15 at a sports shop in New York. (Photo by TIMOTHY A. CLARY/AFP via Getty Images)

(CNSNews.com) - "You have called for an assault weapons ban. I have a simple question for you. What is an assault weapon?" Sen. Tom Cotton (R-Ark.) asked David Chipman at his confirmation hearing on Wednesday.

President Joe Biden has nominated Chipman -- a former ATF agent who later worked as a gun control activist -- to be director of the Bureau of Alcohol, Tobacco, Firearms and Explosives.

Chipman told Cotton, "an assault weapon would be ...what Congress defines it as."

Pressed for a fuller response, Chipman said the ATF has, in one instance, defined an assault rifle as any semiautomatic rifle capable of accepting a detachable magazine above the caliber of .22, which would include a .223, which is, largely, the AR-15 round."

"So you believe that every weapon that takes a detachable magazine that can take a .22 round, or 5.56 in military parlance, should be defined as an assault weapon?"

Chipman told Cotton, "I was sharing with you my knowledge of a program in which ATF has defined this term...and that rifle is a semiautomatic rifle, capable of accepting a detachable magazine, with a round greater than a .22 caliber, and in those cases, firearms dealers on the southwest border are required to make a multiple-sale report to ATF."

Cotton also noted that in stores that sell guns, there is no "assault weapon" section: "I've seen that you can find sections for pistols or handguns, or for shotguns, or for rifles, because those are actual kinds of firearms."

“I think our exchange here illustrates that point that there really is no such thing as an assault weapon,” Cotton said.

“That is a term that was manufactured by liberal lawyers and pollsters in Washington to try to scare the American people into believing that the government should confiscate weapons that are wildly popular for millions of Americans to defend themselves and their families and their homes.”