'How Many Genders Are There?' Biden's Education Secretary Refuses to Answer 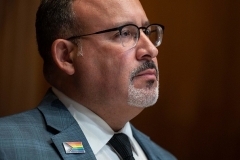 (CNSNews.com) - "We emphatically support all students taking advantage of all opportunities in our schools, including athletics, the arts, and that includes transgender students,"  Education Secretary Miguel Cardona told the House Education and Labor Committee on Thursday.

"So that's something that we stand firm with, and we recognize that discrimination against any student is unacceptable, and we stand strong there."

Rep. Mary Miller, an Illinois Republican, on Thursday challenged Cardona on the administration's new guidelines for protecting the rights of transgender students -- possibly at the expense of other students' rights.

"I won't be answering your question," Cardona told Miller, when she asked him how many genders there are.

Rep. Miller pointed to a new resource for students and families on "Confronting Anti-LGBTQI+ Harassment in Schools," which the Education Department released on Wednesday.

"This document gives an example of harassment, which is a teacher telling students that there are only two genders -- boys and girls. Before we start penalizing teachers for stating a genetic and biological fact about genders, can you please clarify for the committee how many genders there are?" Miller asked Cardona.

Miller rephrased the question: "You used as an example of harassment a teacher who stated there are only two genders, male and female. That's a genetic and biologic fact. That is an example, under your leadership, that you are putting out to people. How many genders are there?" Miller asked again.

Cardona responded with a question of his own: "How would you respond to a student who is nonbinary in your classroom?" he asked.

"But how many genders, will you please state--" Miller started to say.

"I won't be answering your question," Cardona snapped. "You can continue your line of questioning."

Miller noted that the Education Department's "resource" also indicates that preventing biological males from joining female teams constitutes harassment under Title 9. She asked Cardona if his department's interpretation of Title 9 "requires schools to allow transgender girls -- in other words, biological males who claim to identify as female but have significant advantages in size and strength -- to compete on female-only sports teams?"

"Title 9 protects all students against sex discrimination or gender identity. All students. No exceptions," Cardona replied.

"So you're saying your interpretation is going to force girls to play against larger, stronger biological males in sports?" Miller asked.

"I think you're missing the point here, where students need to feel welcome into our schools, and we need to create welcoming environments," Cardona said. "And we recognize that sports and other extra-curricular activities are opportunities for students to engage and build team-building skills and set goals for themselves and continue to thrive. I don't promote any type of discrimination against any students, and Title 9 reinforces that."

Miller said it is discriminatory to allow biological males to compete against women because it "will be the end of women's athletics."

"That is incorrect," Cardona shot back.

Rep. Miller continued: "There are those of us who remember 7th grade biology, were taught that there are only two sexes in the human species. Does the Department plan to investigate and then penalize teachers under Title 9 who continue to teach the biological fact that there are two sexes?" she asked.

This is another example where it demonstrates a lack of confidence in our educators to be able to meet our students where they are and welcome them into school environments that are free of discrimination and harassment.

Going back to my opening comments, what I heard from students at Harvey Milk school, they want schools that embrace them and welcome them and provide nurturing environments. That's what I'm going to stand behind 100 percent. Title 9 reinforces that. And the students that I speak to that are in school today -- respect that and appreciate that. They want that from their educators and their leaders.

That's what they're going to get from me as Secretary of Education.

The Education Department's resource on "Confronting Anti-LGBTQI+ Harassment in Schools," released on June 23, says all public schools "have a responsibility to investigate and address sex discrimination, including sexual harassment, against students because of their perceived or actual sexual orientation or gender identity. When schools fail to respond appropriately, the Educational Opportunities Section of the Civil Rights Division (CRT) at the U.S. Department of Justice and the Office for Civil Rights (OCR) at the U.S. Department of Education can help by enforcing federal laws that protect students from discrimination."

Examples of the kinds of incidents CRT and OCR can investigate include:

-- A lesbian high school student wants to bring her girlfriend to a school social event where students can bring a date. Teachers refuse to sell her tickets, telling the student that bringing a girl as a date is “not appropriate for school.” Teachers suggest that the student attend alone or bring a boy as a date.

-- When he starts middle school, a transgender boy introduces himself as Brayden and tells his classmates he uses he/him pronouns. Some of his former elementary school classmates “out” him to others, and every day during physical education class call him transphobic slurs, push him, and call him by his former name. When he reports it to the school’s administrators, they dismiss it, saying: “you can’t expect everyone to agree with your choices.”

-- A community college student discloses he’s gay during a seminar discussion. Leaving class, a group of students calls him a homophobic slur, and one bumps him into the wall. A professor witnesses this, but does nothing. Over the next month, the harassment worsens. The student goes to his dean after missing several lectures out of fear. The college interviews one, but not all, of the harassers, does nothing more, and never follows up with the student.

-- An elementary school student with intersex traits dresses in a gender neutral way, identifies as nonbinary, and uses they/them pronouns. The student’s teacher laughs when other students ask if they are “a boy or a girl” and comments that there is “only one way to find out.” The teacher tells the class that there are only boys and girls and anyone who thinks otherwise has something wrong with them. The student tells an administrator, who remarks “you have to be able to laugh at yourself sometimes.”