House Republican Files Articles of Impeachment Against Biden: 'Shot Across the Bow' 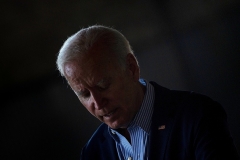 (CNSNews.com) - Four Republican House members are calling for the impeachment of President Biden, based on "clear violations of his duties as president."

They admit the effort won't go anywhere in a Democrat-controlled government, but they describe it as a "shot across the bow" for "when" Republicans take back the House in 2022.

"Yesterday (Tuesday) I filed three articles of impeachment against President Biden based on what I believe to be clear violations of his duties as president.

"His willful negligence of the border crisis is a failure to maintain and defend American sovereignty. Biden’s attempts to extend a federal eviction moratorium despite the Supreme Court’s warning and his own admission that he has no power to do so is a blatant and intentional action that violates the separation of powers. Finally, the withdrawal from Afghanistan was not just a disaster. By pulling military personnel out before the evacuation of American civilians, President Biden shamefully left our own citizens in danger. Additionally, his failure to secure billions in military hardware before our departure amounts to aiding and abetting the enemy while he also violated our allies’ trust.

"I don’t take this step lightly. Before the Afghanistan debacle, I urged my colleagues to consider a measured, thoughtful conversation on the merits of impeachment. While the President’s dereliction of duty on Afghanistan compelled me to introduce this resolution, it is entirely likely we could add to it once the Biden administration attempts to implement its intended private sector vaccine mandate.

"There are political dynamics in Congress I recognize will prevent this from ever being debated. But I could not stand by while President Biden commits what I believe to be flagrant and deliberate violations of his oath of office.

"This is a shot across the bow. When Republicans take back the House, we will take our commitment to the separation of powers, our role as a check and balance to the executive branch seriously. President Biden, Vice President Harris, and the entire administration is officially on notice."