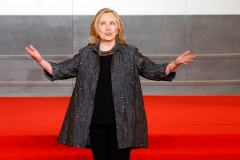 (CNSNews.com) – “You know, I think we not only came close to a full constitutional crisis, I think we're still in it,” Democrat Hillary Clinton told “The View” on Monday.

“And that gives me absolutely no satisfaction in saying this, because I think we’re at a very dangerous, continuing, high-level attack on the legitimacy of our government and the election of our president.”

She blamed former President Donald Trump and the “mob” he “created.”

And obviously, our former president is not only behind it, he incited it, he encouraged it, and he continues to do so. And you have leaders of the Republican Party who have willingly gone along, as if they're members of a cult -- not a political party, but a cult.

And their continuing attacks on the election, their refusal to say, you know what, we've counted these votes -- it's over, we're going to move on -- has sown so much doubt, and then you combine it with the disinformation network known as Facebook, and you've got a volatile mix.

So you know, we are still in the midst of a concerted, well-funded effort to undermine American democracy.

Speaking of Donald Trump’s potential presidential ambitions in 2024, Clinton said, "I think if he wants to be the nominee, he will be the nominee. I don't think there's any doubt about that. And I think that everybody else who is talking about it or considering it understands that.”

She said that's why other potential presidential contenders are playing up to Trump.

“I think it say volumes about the Republican Party today that someone who has the record of attacking our own government, lying to people about the biggest health crisis that we've had in over a hundred years, namely COVID -- the list goes on -- is considered the leader, because they're all afraid of the mob that he has created and that he keeps energized and he's going around the country and doing these rallies.”

Clinton said demagogues arise from time to time, and some of them have a "sustained position of leadership and authoritarian leadership...where they are calling the shots for people who either truly believe what they're being told or would throw their lot in for partisan reasons, financial reasons, ideological reasons..."

Clinton is promoting a new book, a novel written by best-selling author Louise Penny in collaboration with Clinton, called "State of Terror."